Scenes along the western region of the Southern Pacific.

I did not live near any Southern Pacific tracks until the early 1980's when my wife and I moved to Oregon.  We first lived in Tualatin but that was a fairly short stay and we moved to Newberg, not far from the Publishers Paper Mill.  Talk about a stink!   But my job was in Newberg, so it all worked out.

At that time, the line through Newberg was used a couple of times a day by the SP.  The mill took in lots of wood chips and chemicals and sent out a lot of paper, so there were a lot of wood chip cars, tank cars, and box cars interchanged in the little yard at Newberg.  SD9's were the mainstay on the SP out there at that time and I really loved their appearance.

My job as a dump truck driver took me all over the Tri County area; Portland and the surrounding area, south to Woodburn, Yamhill, McMinnville, east out the Columbia Gorge a ways, west to Banks, Vernona, Forest Grove, southeast to Estacada, Boring, Molalla .... all of it served by Southern Pacific (other than the gorge) and other railroads.

Later in my life I lived in the Dunsmuir / Mt. Shasta / Weed area of northern California, having moved there about a year before Union Pacific absorbed the SP.   But I was still able to get quite a few good shots of SP power during the late 1990's in northern California and southern Oregon.

But, I digress.  I'll try and lay these photos out in somewhat chronological order, albeit I was not good at recording dates back then and the only dates I have on a lot of them are the dates I scanned the originals, back in 2005 or so.  I'm sure this will be much better than the photo gallery module I slapped in place when I first went with a mobile-friendly version of this website back in ... who knows. 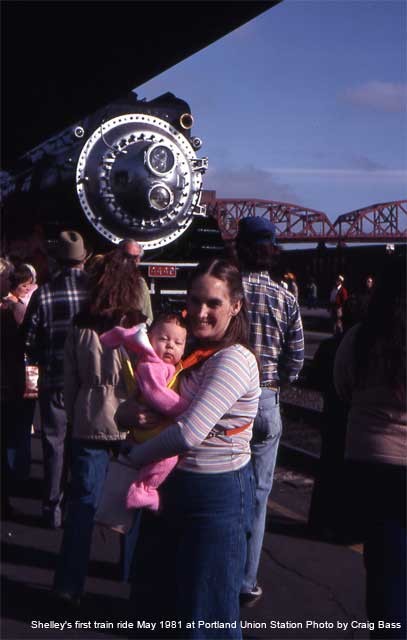 Our first daughter was born in 1981 and we took her on her first train ride just four months later. In this case, we rode the train pulled by SP4449 from Portland Union Station as far as Eugene when it was en route to Sacramento for Rail Fair '81 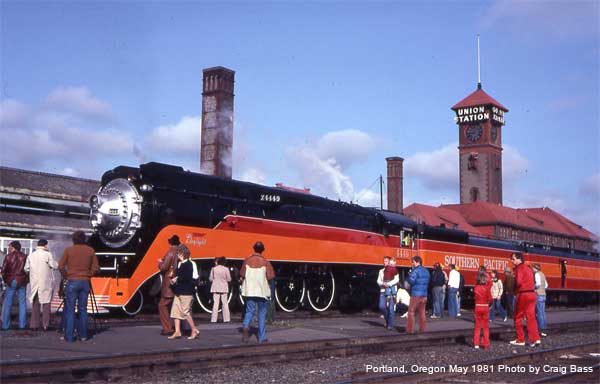 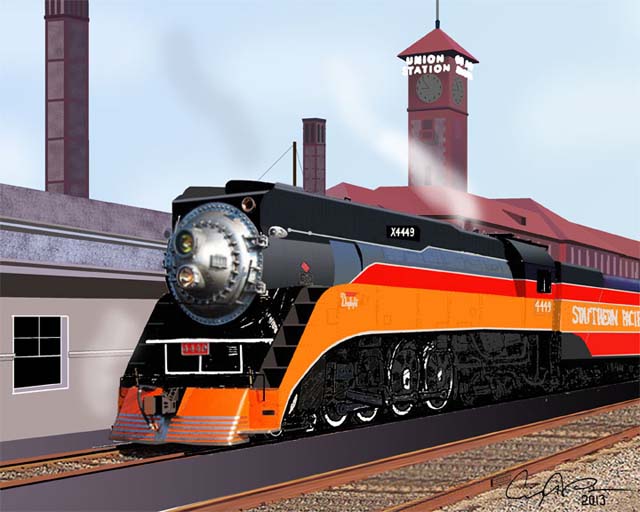 Never could draw people, but here's my rendition of that day. 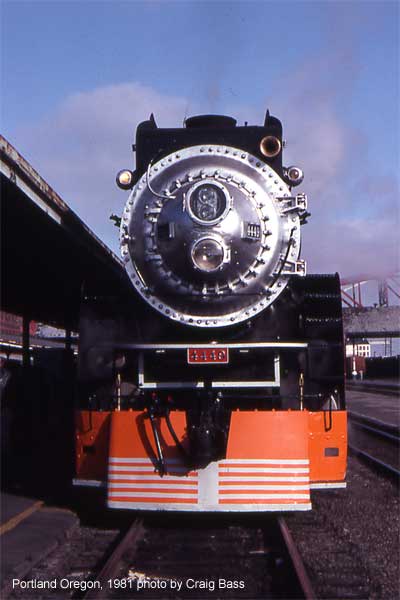 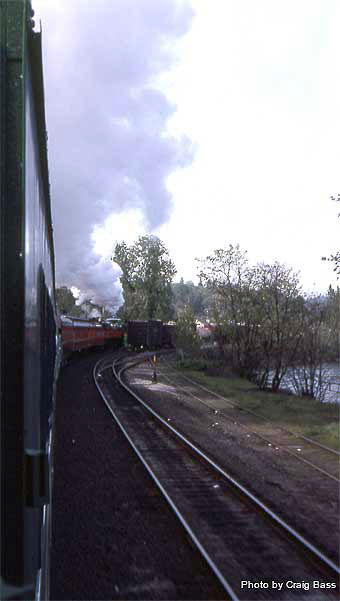 Southbound along the Willamette River south of Oregon City 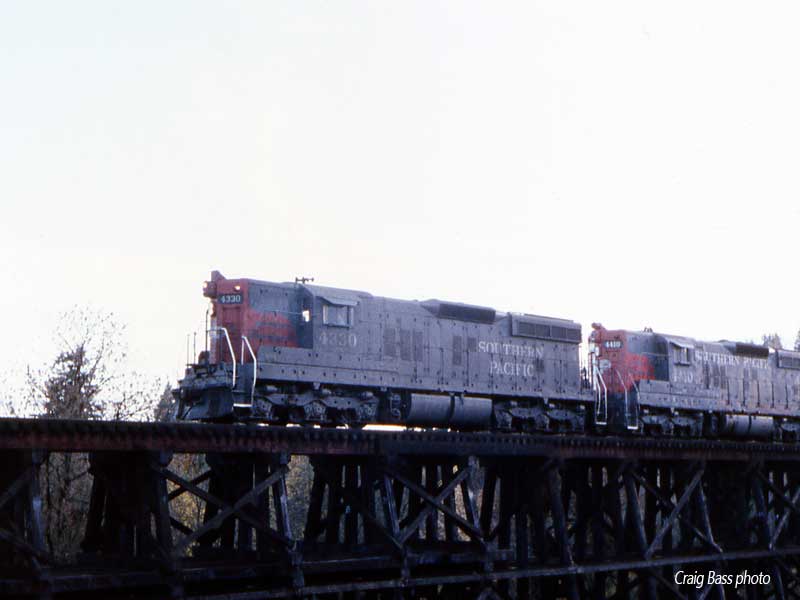 I was not very good with a camera back then. If it wasn't good in Auto, then it just wasn't good.
SD9 4330, a rare unit due to the stacked Southern Pacific lettering on its flanks, is northbound, crossing a wooden trestle entering Newberg, Oregon
Map location 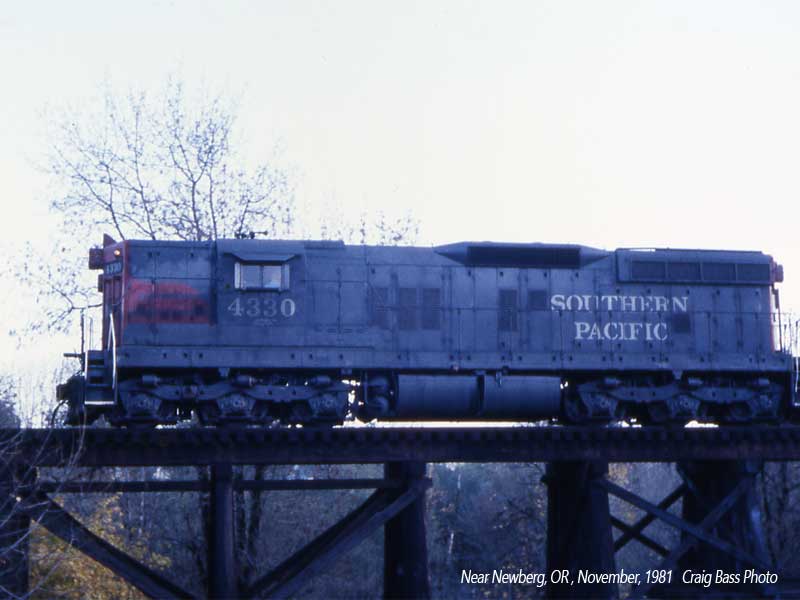 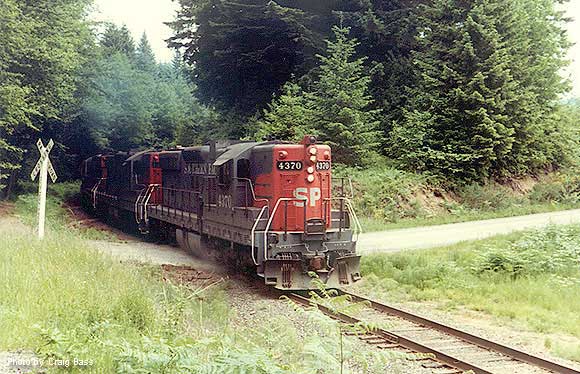 I captured 4370 pulling an eastbound train on the Tillamook line at NW Scofield Road. Odd thing about the Southern Pacific; even though this train is heading west it's considered to be eastbound, as it's heading away from SP's headquarters in Oakland, CA.
Map location 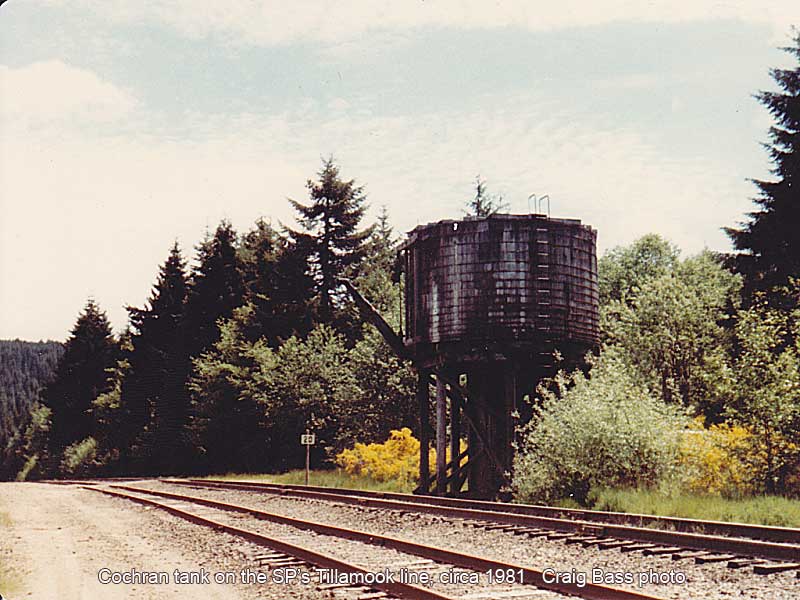 An hour or so later, I was waiting for the train at the water tank at Cochran. This was, to my understanding, the highest water tank elevation-wise on the entire Southern Pacific system.
Map location 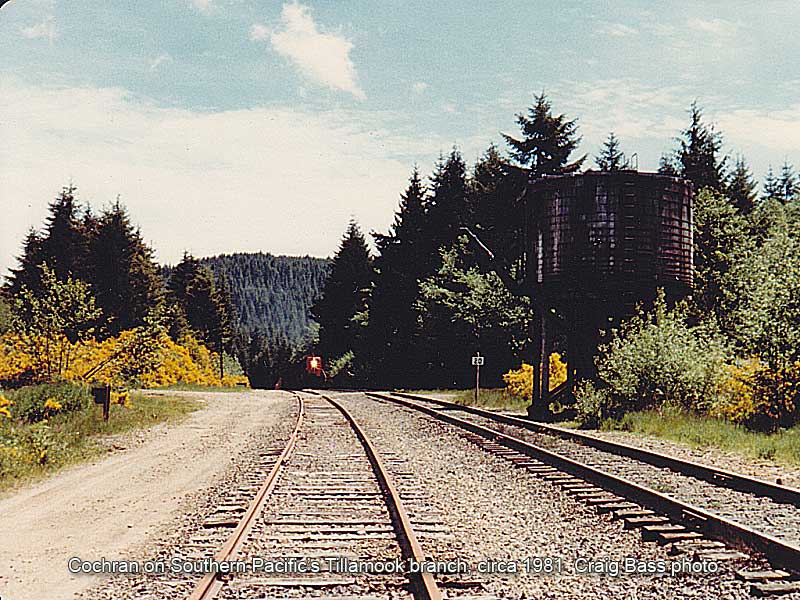 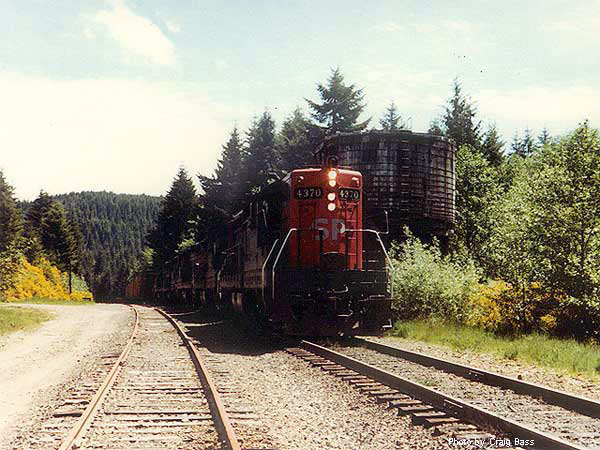 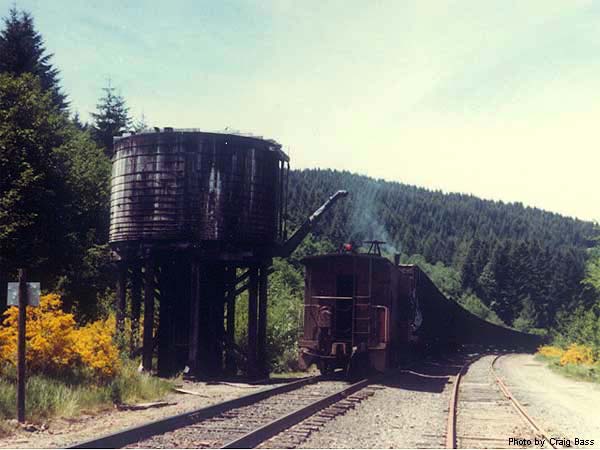 I still remember the smell of the smoke from the oil stove! 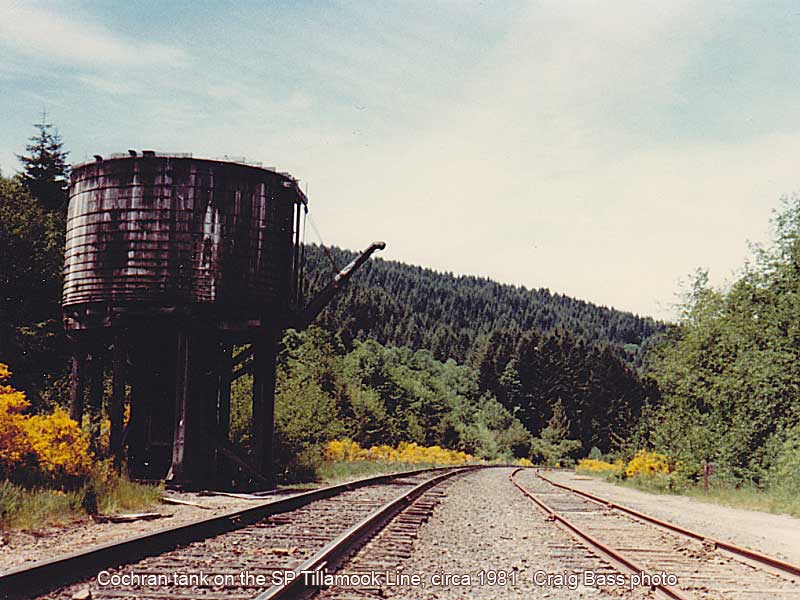 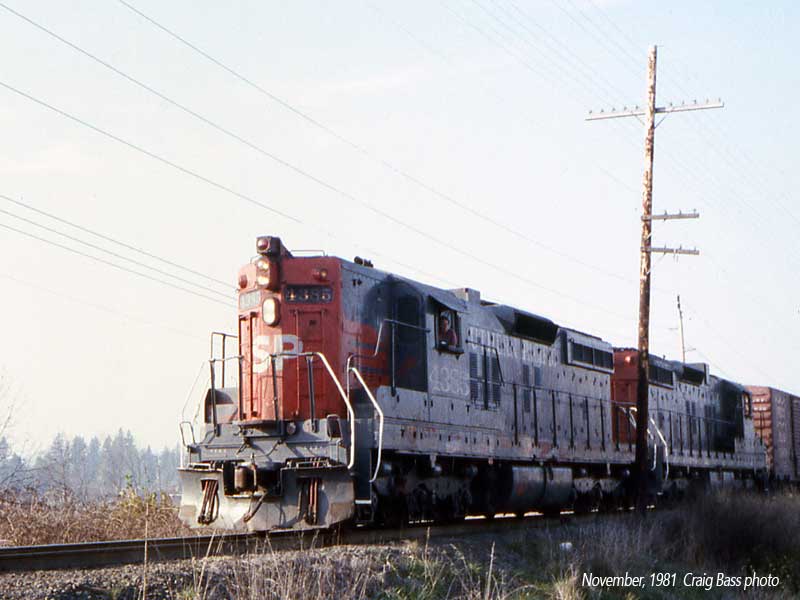 I usually remember exactly where a photo was taken, but this one eludes me. I'm thinking it was probably between Beaverton and Tigard, but I could be wrong. 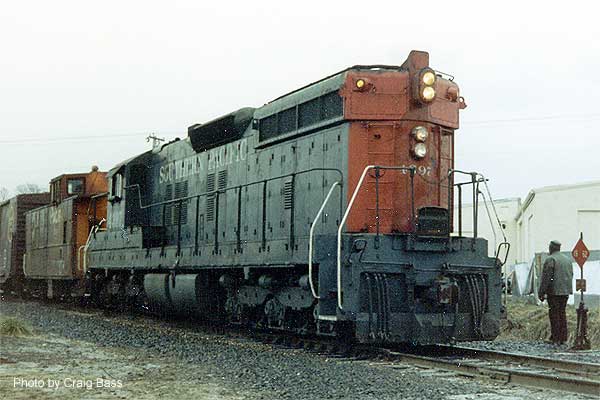 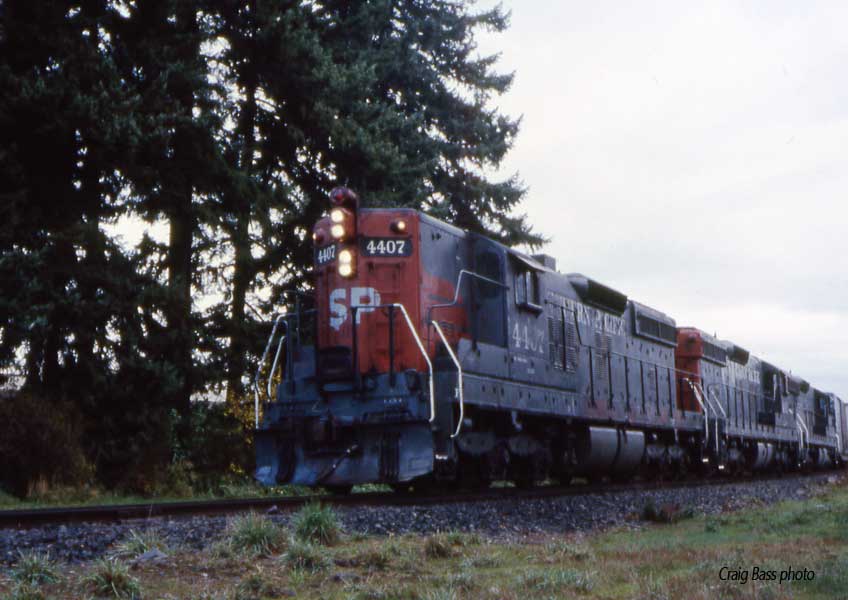 4407 on 1 November, 1981 at another unremembered location, but I seem to think it was near Forest Grove.  I miss that light package! 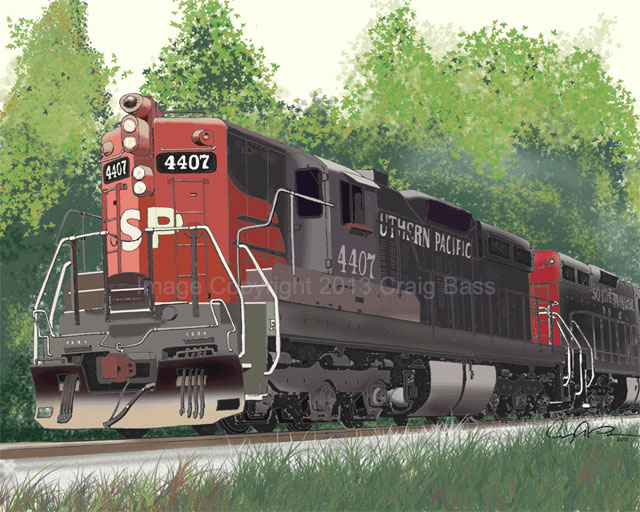 My rendition of that memory, albeit with more trees. 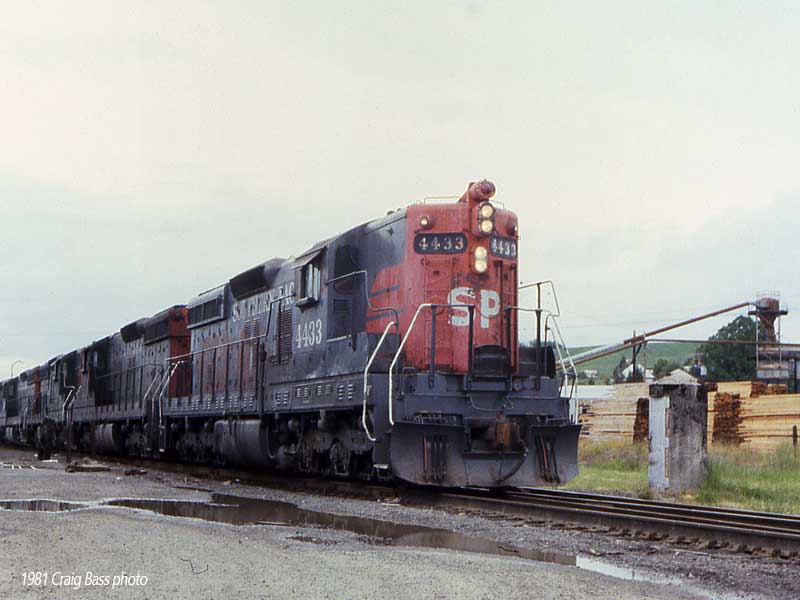 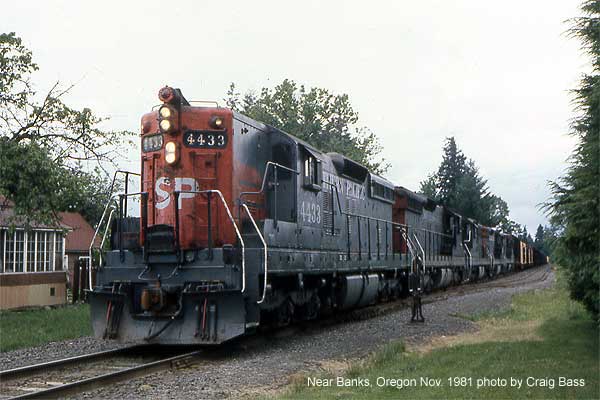 A map tells me that this photo was taken in Roy, Oregon. Again, I have a caboose stove oil smoke memory of taking this photograph.
Map location 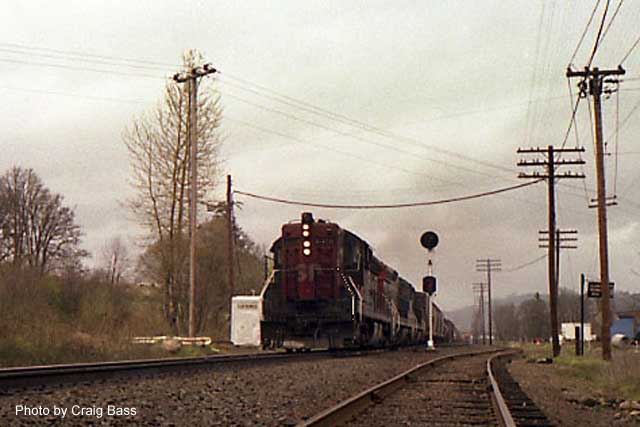 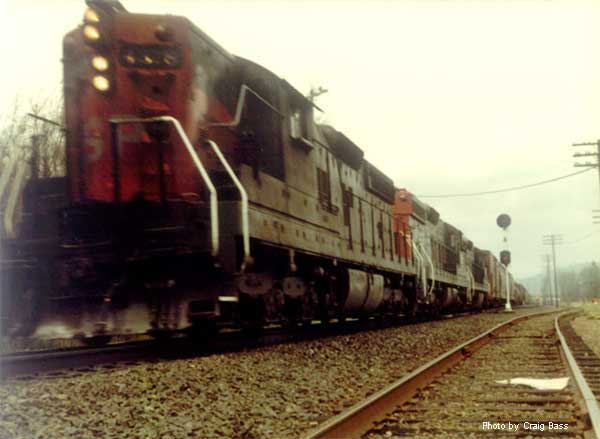 A westbound train at Clackamas on the Brooklyn Sub.
Approximate map location 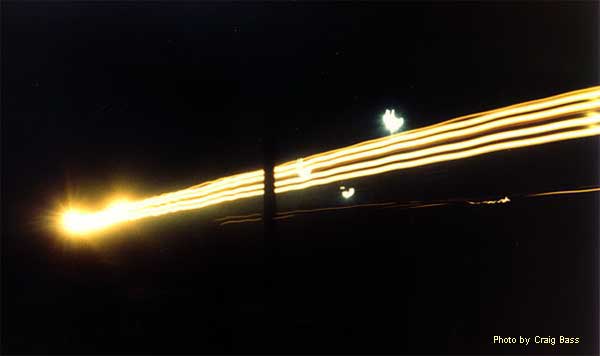 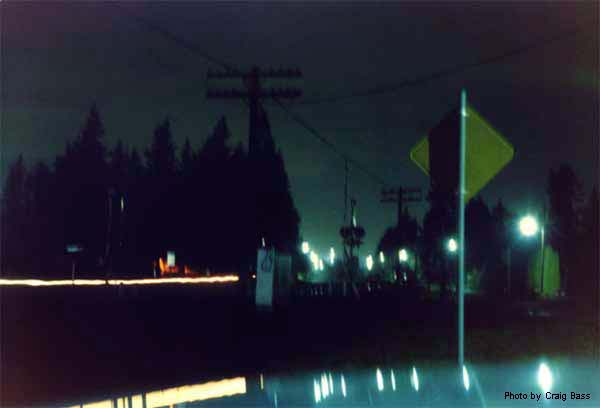 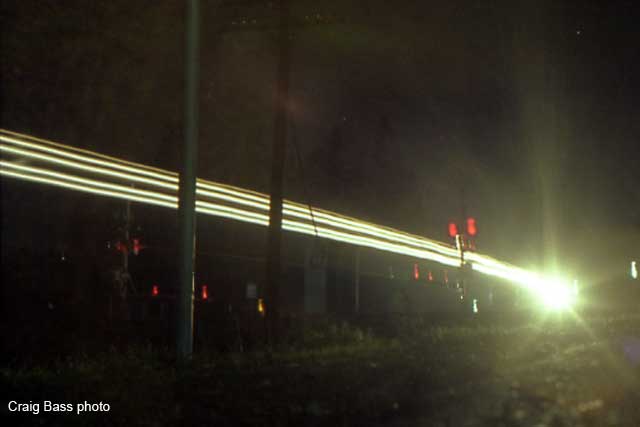 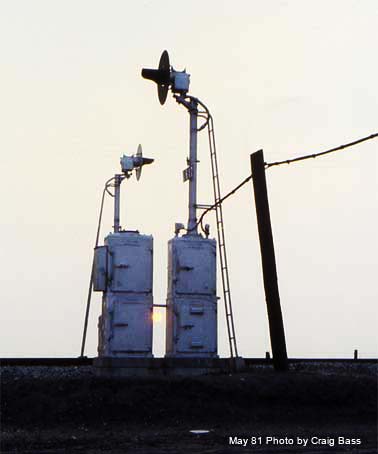