Disclaimer: This is NOT an official OC&E, OC&E Trail, Woods Line or Weyerhaeuser web site.

This narrative was written in 2003.  Much has changed on the trail since then as the Klamath Rails to Trails Group continues to make improvements.  The bulk of these photographs were taken in 2003, which was also when the overview map was drawn; newer photos are marked with dates taken.

Construction on the California & Eastern Railway, from Klamath Falls Oregon to Bly Oregon, was started in 1917. The line headed east out of Klamath Falls, through the "towns" of Olene and Dairy, then turning north it reached the community of Sprague River by 1923. A unique double switchback made the crossing of Bly Mountain practical. From Sprague River, the OC&E continued in an easterly direction, going through Beatty and ending at Bly in 1929. Although the majority of loads hauled by the OC&E consisted of logs, lumber and sawdust, it also served the agricultural transportation needs of the communities along its route.

At Sycan, just east of Beatty, Weyerhaeuser Lumber Company had a small yard and shops for their “Woods Line” which threaded northward into the mountains for 45 miles, serving several log loading areas and a transfer facility in Lake County.

The OC&E was operated for decades by the Southern Pacific and the Great Northern (later Burlington Northern) on an agreed-upon alternating basis until the entire line was purchased by Weyerhaeuser in 1975. The line was profitable for a time, but as logging slowed down, traffic waned until the line was closed in 1990 and the rails began to come up soon after. The bridges were left in place, with the exception of one over Highway 140 east of Olene.

Weyerhaeuser “railbanked” the right of way to the Oregon Parks and Recreation Department, who has turned most of the main line of the OC&E and Woods Line into a 100-mile-long Rails-to-Trails “linear park” called, appropriately, the OC&E Woods Line State Trail.

Starting out at the west end of the current OC&E Trail, a low-level switch stand marks the location of a switch in what used to be the Shops Yard. 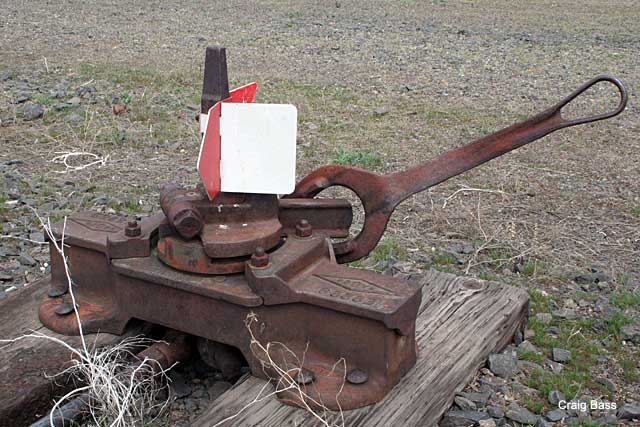 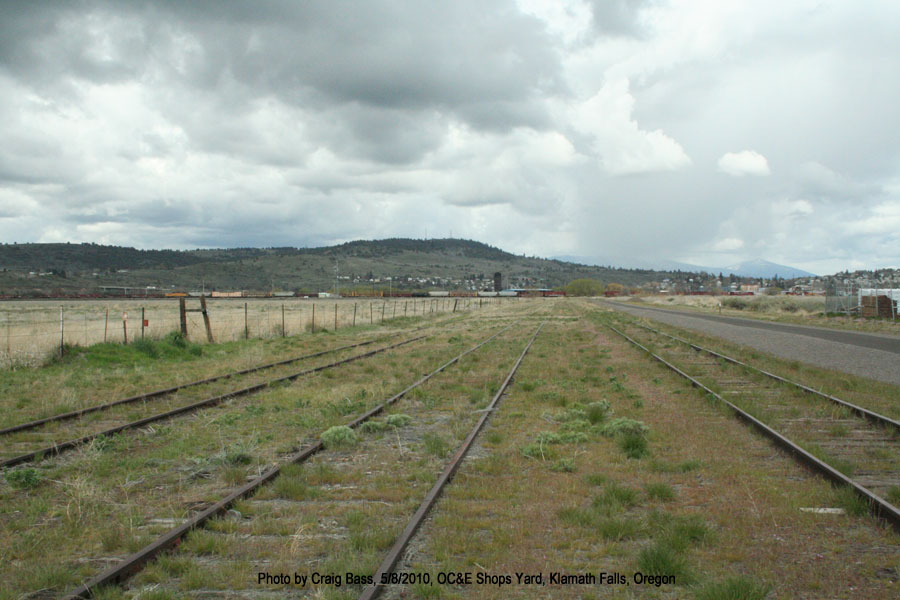 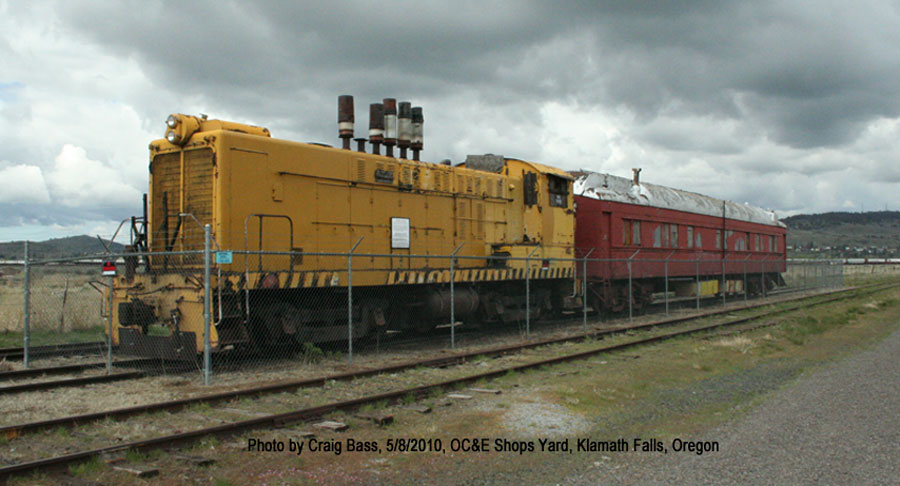 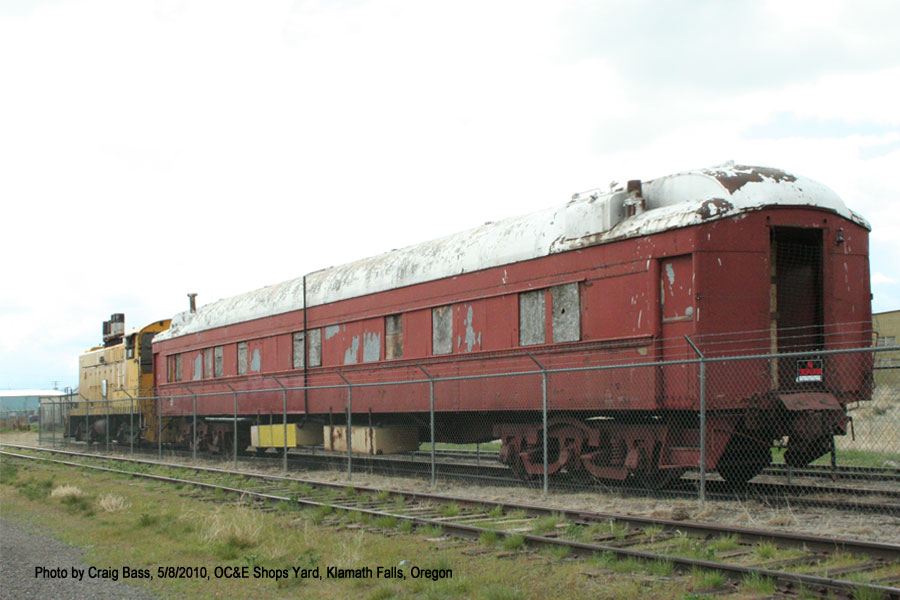 An informational sign behind the fence describes their history. 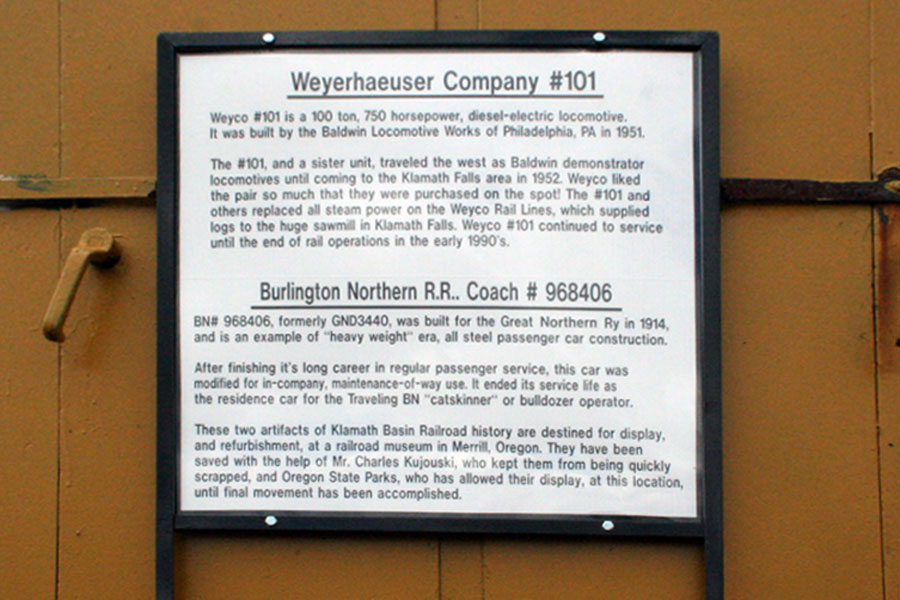 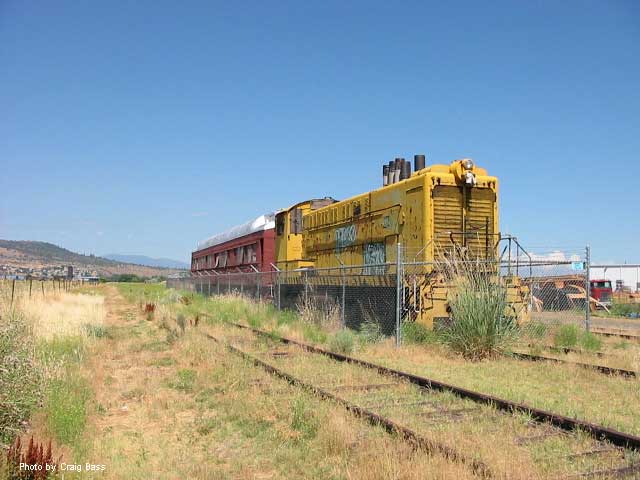 Adjacent, the maintenance shop for the trail project is in the process of making rest benches to distribute along the trail. 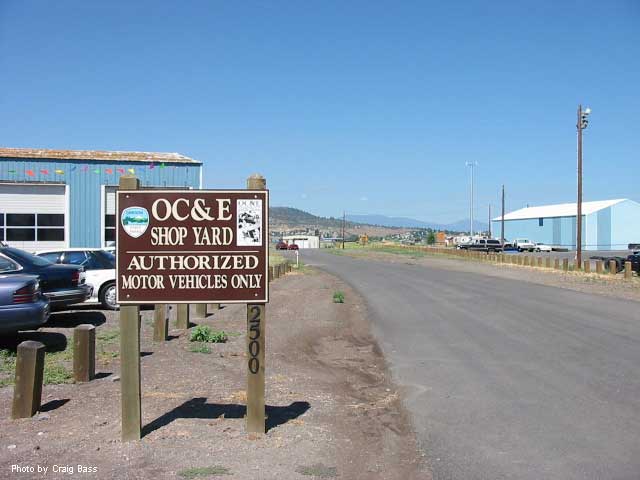 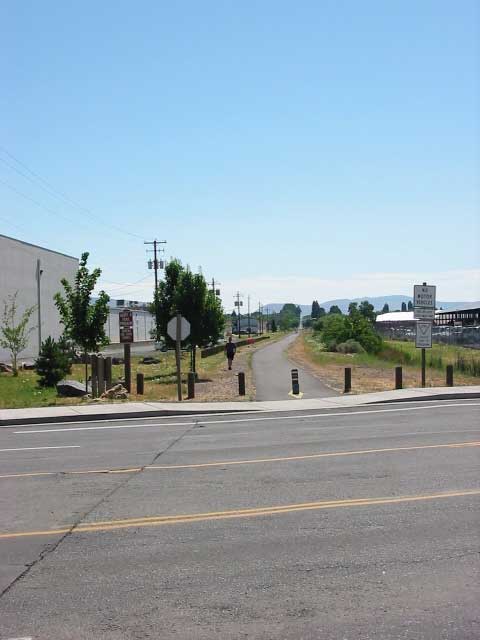 The OC&E Woods Line State Trail begins at Washburn way, although its official beginning trailhead is at the old wye located at Crosby and Avalon Street. This wye once provided access to one of the OC&E’s last customers (a chemical company located at Hilyard Street), as well as their route to and through the BN yard to cross the SP’s main to access the Weyerhaeuser mill on the west side of Klamath River. 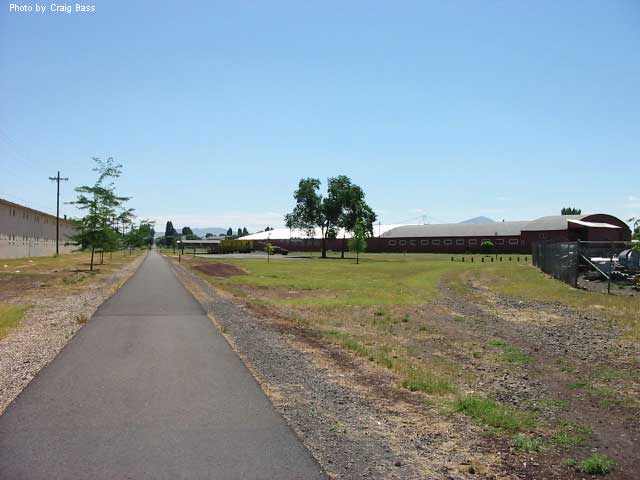 At the wye today, one finds an old caboose, repainted and hemmed in on one side by a wooden deck, which acts as an information kiosk for the OC&E Woods Line State Trail. The old wye right of way is still visible in the grass; the caboose sits on an existing short length of curved track which represents the only remaining rail of the wye. 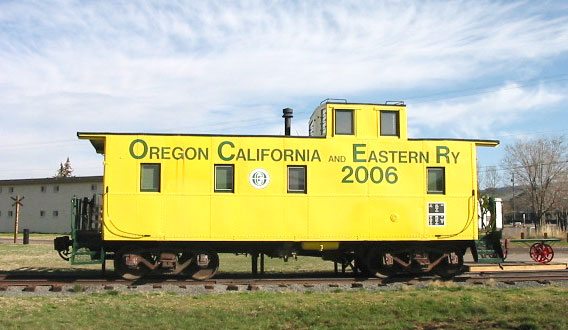 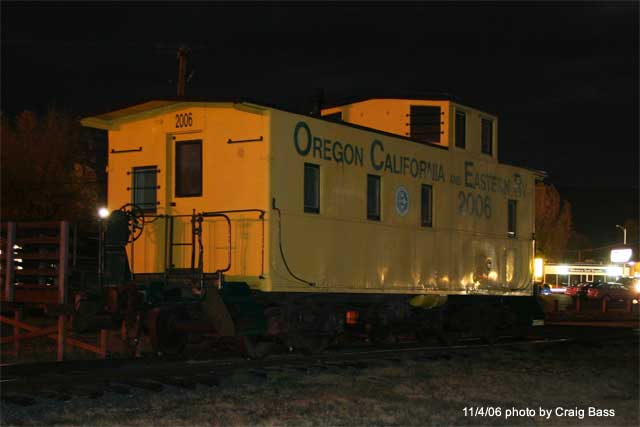 Over the years the caboose got a different paint job; as of 2019 it has been painted basic box car red:

Proceeding east-southeast through the Klamath Falls suburbs, the line crosses the “A” Canal on an 1898 steel bridge just east of Summers Lane. According to Arthur E. Sevigny, Former President of the Klamath Rails-to-Trails Group, "the A-canal bridge was built by the Phoenix Bridge Co. of Phoenixville, PA. It was originally located on the 17th crossing of the Sacramento river on the SP line. It is a twin to bridges that were also on the 14th and 15th crossing. Our bridge was surplused in 1935 due to rechanneling of the river to deal with erosion of bridge bulkheads from flooding. It was moved to Klamath Falls in the late 30s for use on the OC&E. Note that the OC&E was owned by SP & GN during that time." 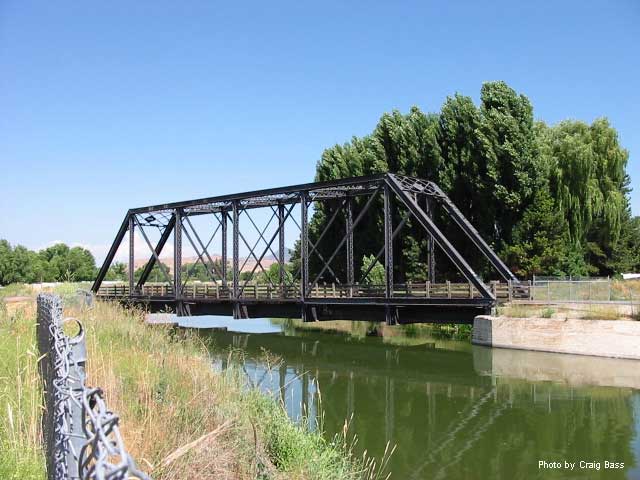 At the crossing of Highway 39, trail milepost 4.5, is evidence of two spurs. One which served what is now the Klamath Pump Center still has rusted rails in place. The other, an “L” shaped (if viewed from above) earthen loading ramp/dock with railroad ties used as retaining walls at “trackside,” could still be in use for unloading trucks. The dock is designed for unloading cars from the side (there still a steel plate there which was used to bridge the gap between the car and the dock) and for unloading flatcars from the end (a pocket in the cribbing of the dock made room for the coupler of the end car, allowing the car deck to meet the dock leaving little gap between them). 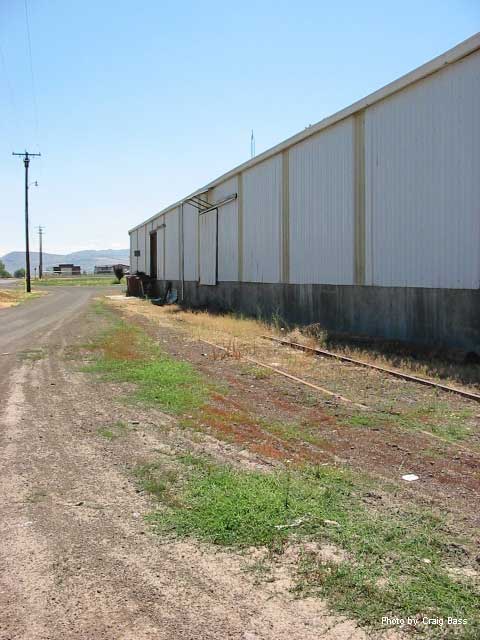 East of Highway 39, the OC&E right of way crosses farm fields on a tangent until it crosses Highway 140 at Olene. This is the end of the currently paved portion of the OC&E Woods Line State Trail. From this point the trail is “graded and rolled” gravel. At Olene there is a rest bench, and the old Olene station sign still stands. 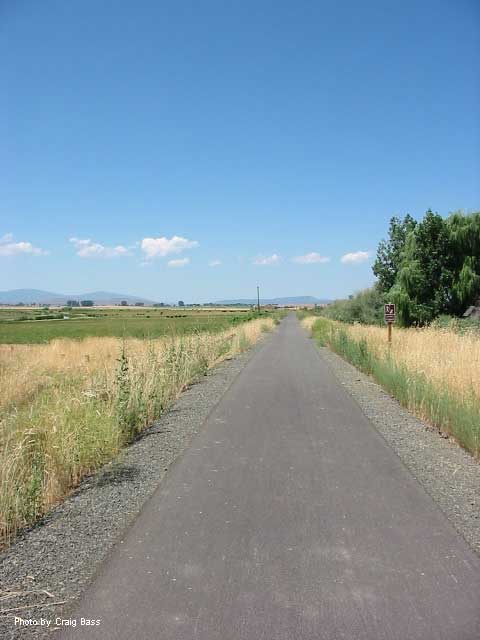 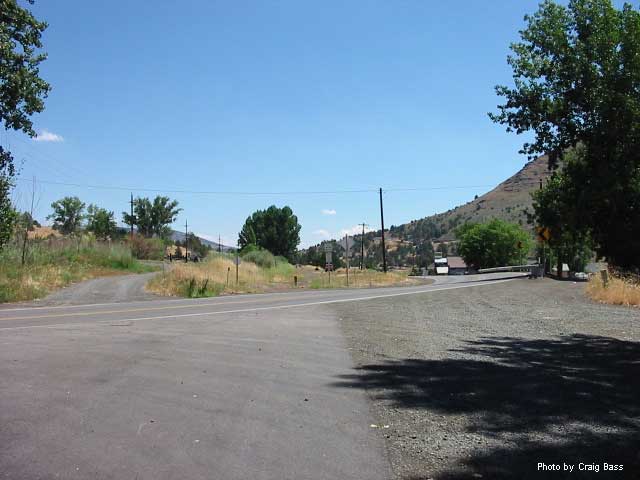 Since the above photograph was taken, Klamath Rails to Trails obtained an old Weyerhaeuser snow plow and installed at at Olene.  They have cosmetically restored it, and have plans in the future to place a small museum in its interior.

Leaving Olene and continuing east, the roadbed trail zig-zags along the side of a ridge paralleling above the highway until it turns northward along the west edge of a valley while the highway continues to the eastern edge of the valley before turning north. The right of way approaches the highway on a long fill at M.P. 11. There is evidence of one concrete bridge abutment at that point, but the bridge is long gone. 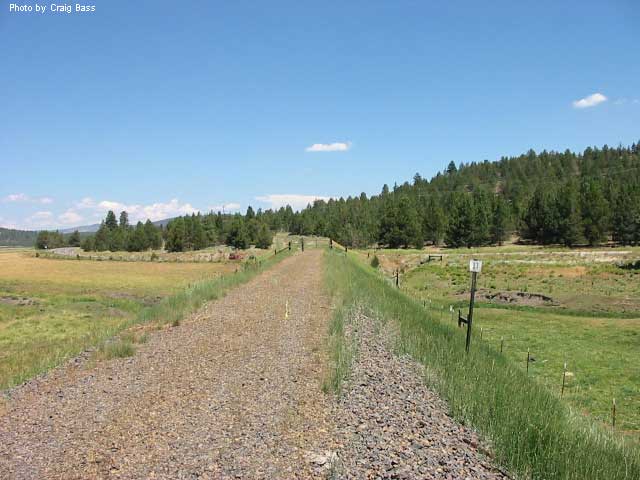 Now on the other side of the highway, the right of way continues upgrade alongside 140 for a few miles then curves right through “Swede’s Cut” and drops gently downgrade on a fill and across Pine Flat through the site of Moyina siding (Moyina’s station sign is still standing as well). The line then ducks under Highway 140’s concrete bridge and begins its descent into Dairy. 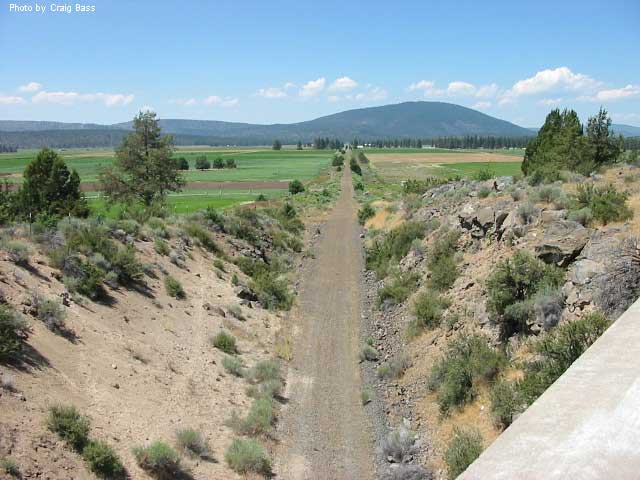 Looking west from the viaduct at Dairy, Oregon toward Moline
Map location 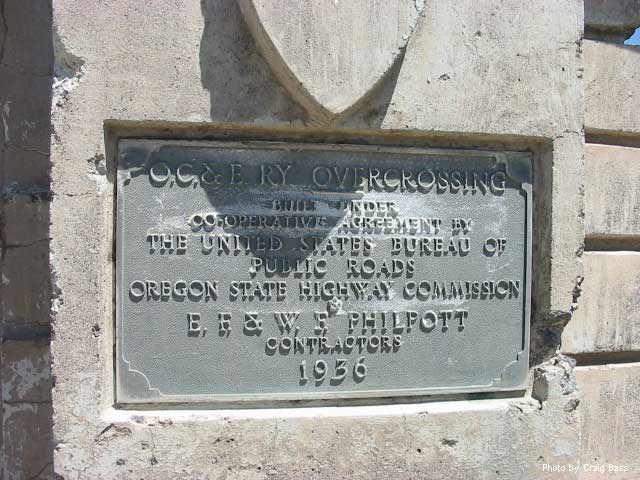 Historical marker on old bridge on Hwy 140 crossing the OC&E. ODOT replaced this bridge several years after this photo was taken and the marker may not still be in existence. 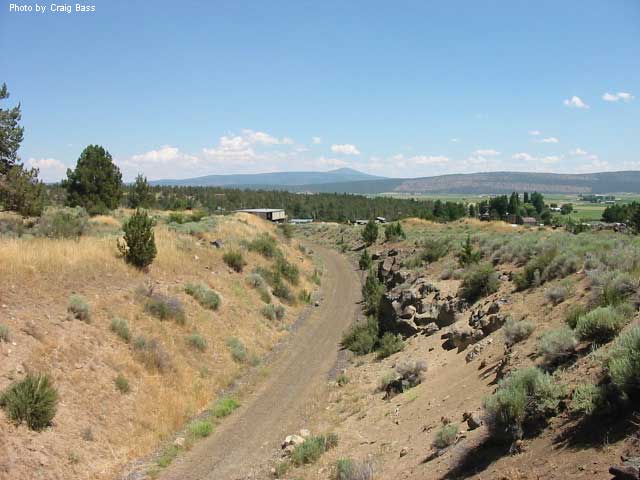 Looking east from the bridge as the roadbed drops into Dairy

At Dairy, an elevated roadbed is all that remains of a wye, the south leg of which once served a grain elevator to the south of Highway 140. 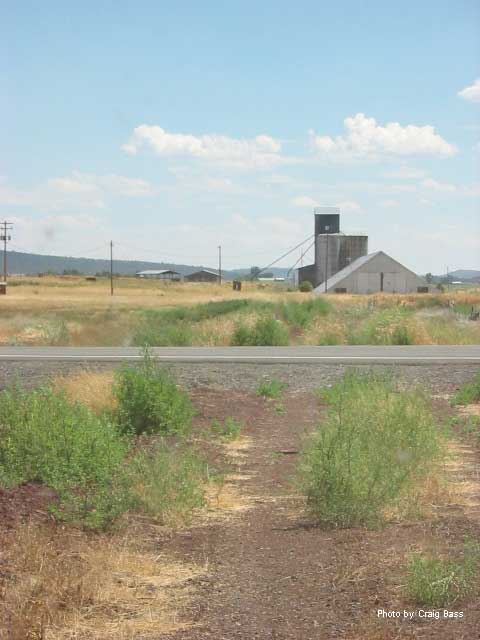 Leaving Dairy, the OC&E curves to the north through farmlands and begins to ascend the foothills of Bly Mountain along the edge of Devil’s Garden. 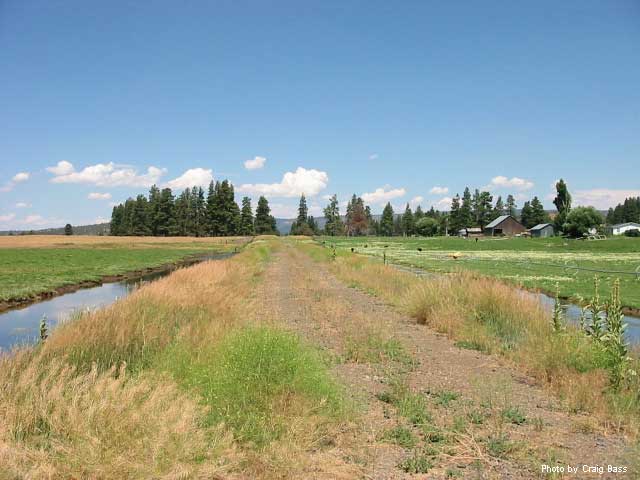 At Bly Mountain, a double switchback was used to get the trains over the mountain. There were plans at one time to construct a tunnel but they never materialized. This double switchback was the last of its kind in regular use in the United States when it was last used in 1990. A stub spur into a quarry used to exist just east of the switchback’s east switch. Today, an old log flatcar rests at the switchback trailhead adjacent to Bliss Rd. 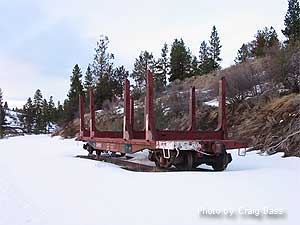 Flatcar at switchback in 2004
Map location 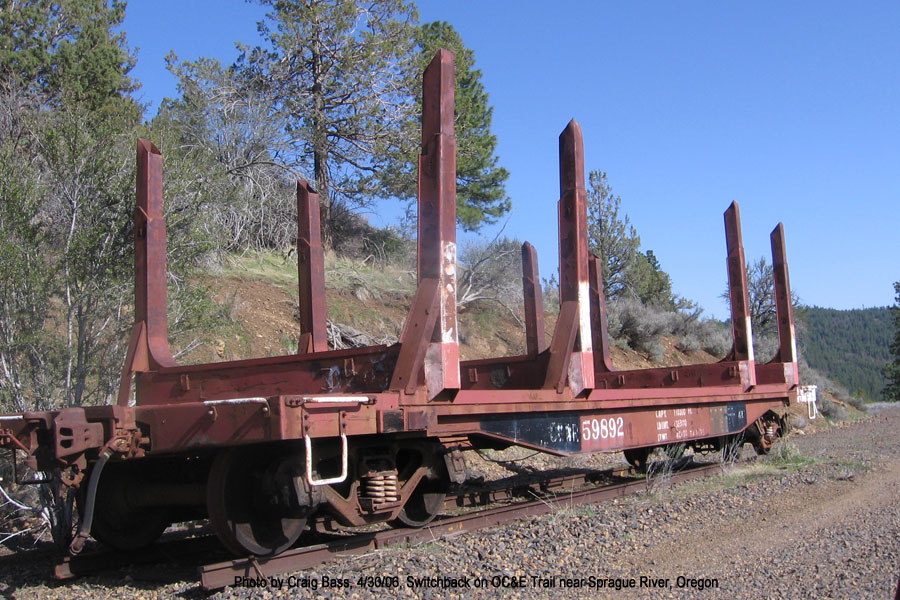 After the switchbacks, the line drops into the Sprague River Valley. It turns to follow the river at the small town of Sprague River (map location), and then makes a beeline east along the river, past Council Butte (map location) and Buttes of the Gods, making for the town of Beatty. Just east of Beatty, Sycan siding (map location) is the diverging point of the Woods Line. Sycan was the main yard and shops for the OC&E’s rolling stock and power.

Continuing east, the OC&E line threads a small canyon and crosses the Sprague River on numerous trestles as it heads to the town of Bly (map location). Weyerhaeuser once had a substantial mill at Bly, but it is now long gone. The founder of the Oregon, California & Eastern Railway, one Robert E. Strahorn, envisioned pushing the line further east to meet the Nevada-California-Oregon Railroad at Lakeview, but the line never got any further than Bly.

Turning north from Sycan, the Woods line begins to climb around Ferguson Mountain, ultimately following the course of Five Mile Creek. The line crosses the creek several times on wooden pile trestles. Where the right of way crosses National Forest Road 27/288 at Horse Glade, 19 rail miles north of Sycan, there is a trailhead for today’s OC&E Woods Line State Trail (map location). Camping is allowed, and there are primitive restrooms available.

The right of way continues wending its way through the forest amid volcanic rock (the ballast- uh, trail bed, for most of the line consists of red volcanic cinders) curving through cuts and over fills. A few miles north of Horse Glade, the roadbed to Camp Six diverges from the main route (map location) and curves east to south into the forest. At the grade crossing on Ivory Pine Road, the white painted "RXR" and limit line pavement markings were still quite visible on my visit in 2003. The main line curves to the northwest, and at trail mile post 27 (counting from Beatty), the line crosses Merritt Creek on a 400 foot long, 50 foot high trestle (approximate map location).

The OC&E Woods Line State Trail ends, for now, at Sycan Marsh. This marsh, and thousands of acres surrounding it, is under the control of the Nature Conservancy. The state has plans to continue the trail along the right of way north of the marsh. For now, though, this is the end of the “graded and rolled” improved trail. From this point on, finding the right of way becomes more difficult. There are numerous forest (logging) roads, many of which may or may not be on the one-time Weyerhaeuser Woods Line right of way, and it is to be assumed these are all on private property.

Somewhere just south of Silver Lake is the end of the Woods Line at a yard called 500 Transfer. At one time, many many years ago, the Great Northern had planned to build their Oregon Trunk mainline south from Bend (Oregon) to meet the OC&E at Silver Lake and thus access Klamath Falls and points south. This ended up not happening once the GN gained trackage rights on the Southern Pacific.

Reference material for this article was obtained at, and used by permission of, TrainWeb.org