...and doing some exploring on the way home.

A storm, high water, rushing current... all added up to erosion of an embankment that encroached upon the right of way along the North Fork of the Pit River at LCRY mile post 466 in Modoc County California.  Don Blansett called me on April 18 to let me know that a rock train and contractors were going to be filling in the eroded bank on the 20th and thought I'd like to come out and photograph the activity.  Of course I would!

He told me where the location was, then said that he'd have John Carswell meet me at the Westside Road grade crossing in "The Beast" and give me a ride down to the site.  I was looking forward to it! 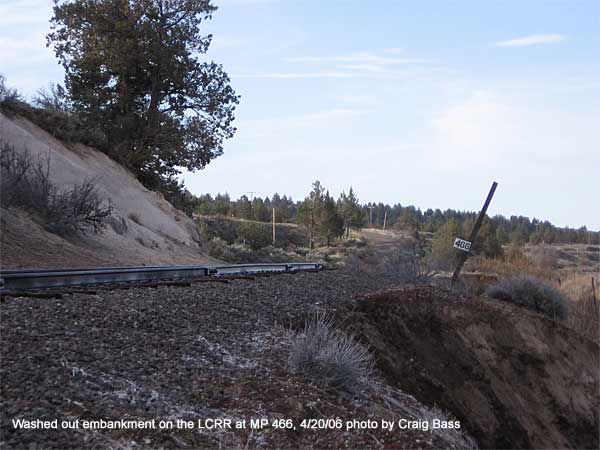 M.P. 466 is along the Pit River south of a place called Surprise Station, in Modoc County, California.
Map location

First, some area history for the history buffs that might be reading. 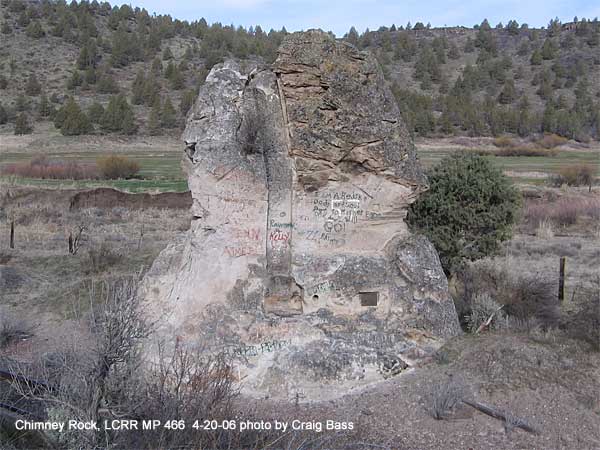 The bank erosion took place just south of Chimney Rock Historical Monument. The rock is named such because a pioneer named Thomas Dennison built a cabin against this rock, and carved out part of the rock to use as his chimney. It is to be noted that the cabin is long gone, and in fact the road bed of the narrow gauge Nevada-California-Oregon Railroad (and today's Lake County Railroad) now occupies the space in which his cabin once stood. 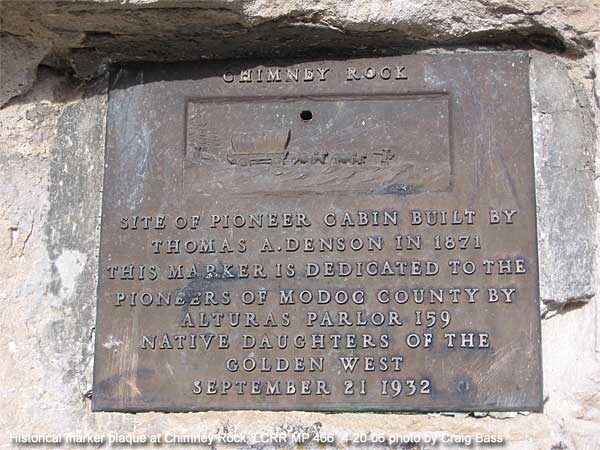 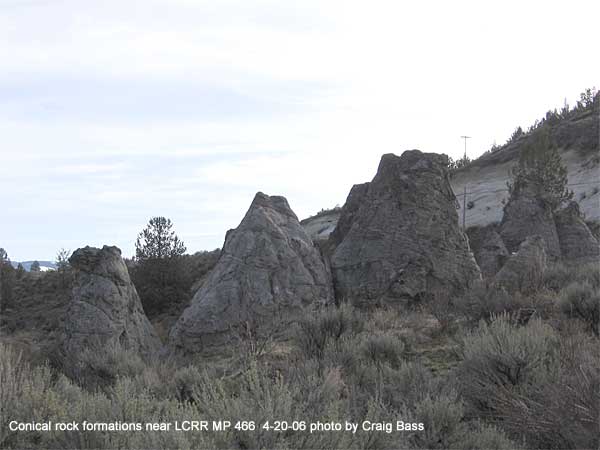 Also adjacent to the site are the Conical Rock Formations, a place of historical interest related to the California Lassen Trail, which split off from the Applegate Trail.

For more information about the Conical Rocks,see Waymarking.com 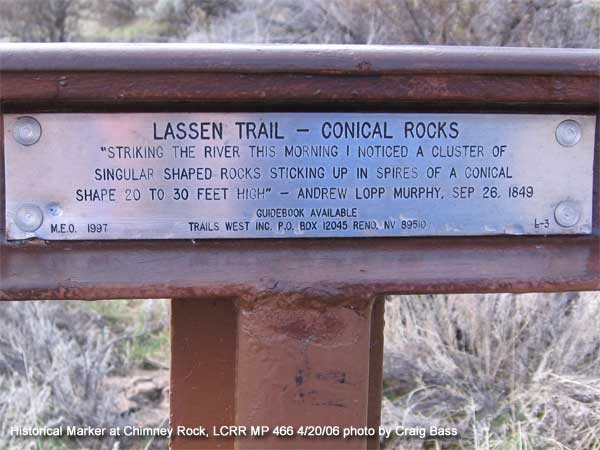 Now, back to the planned erosion repair. 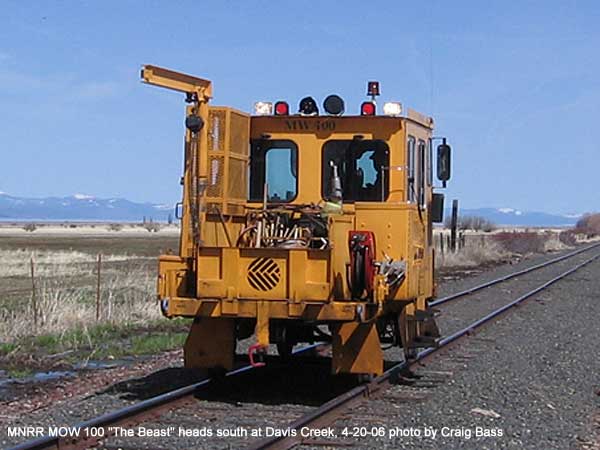 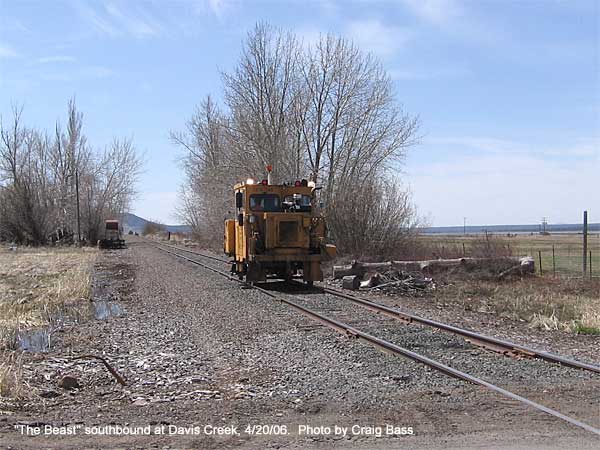 Apparently, John didn't get the memo to stop and pick me up. 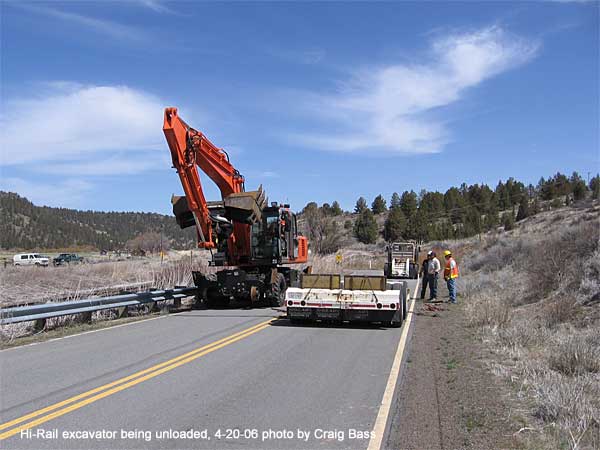 No matter; I beat him back to the work site, where they were in the process of unloading an excavator from a low boy trailer.
Map location 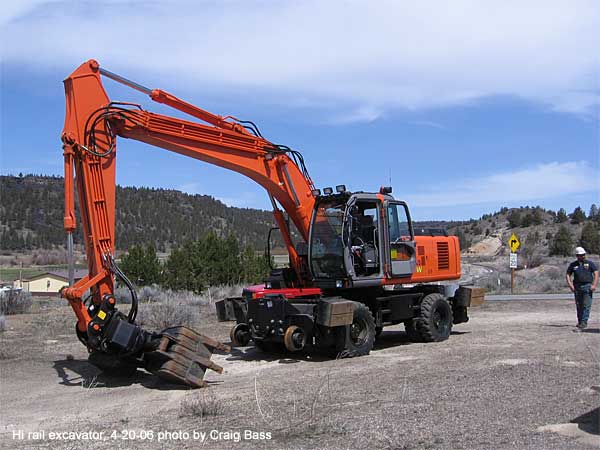 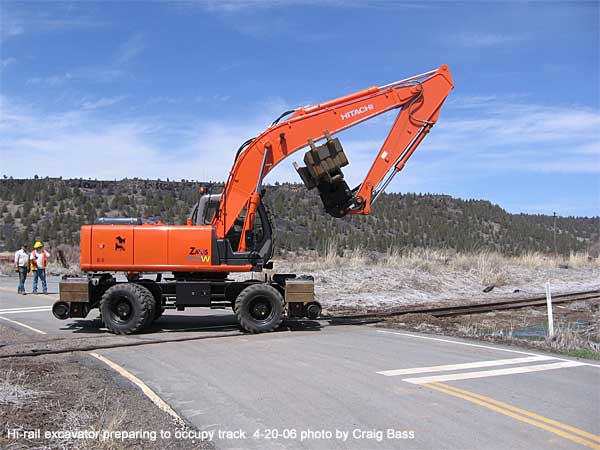 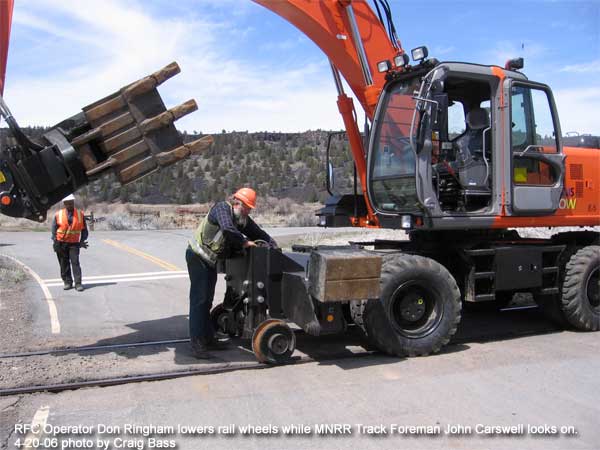 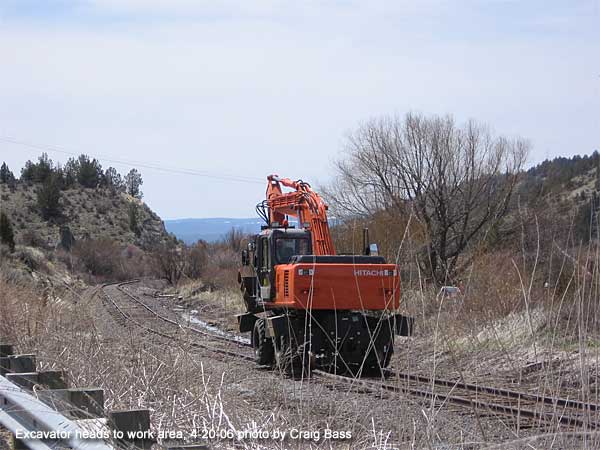 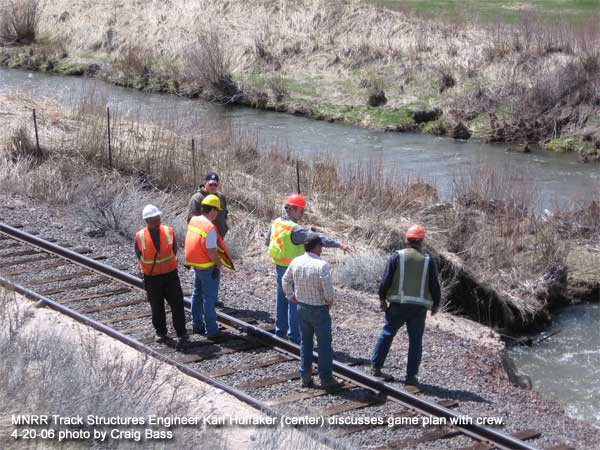 Before any work actually begins, a trackside conference is held with the crew to talk about how the job is to be done. 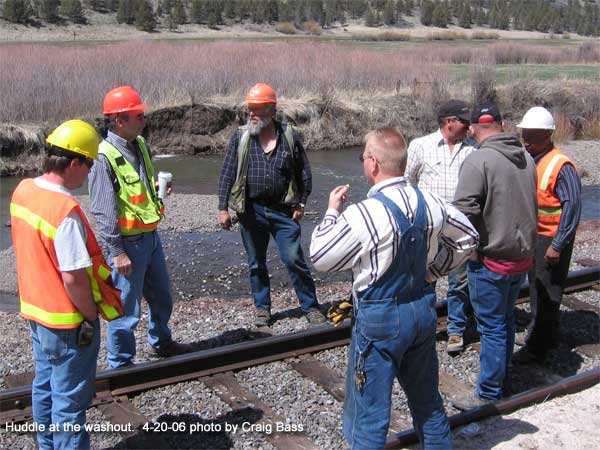 The environmental consultant hired by MNRR has decided that the current is still too strong and any rocks dumped over the side today will stir up a great deal of silt which will effect downstream river conditions. The plan is put on hold for a few days to allow the river to calm down a bit. 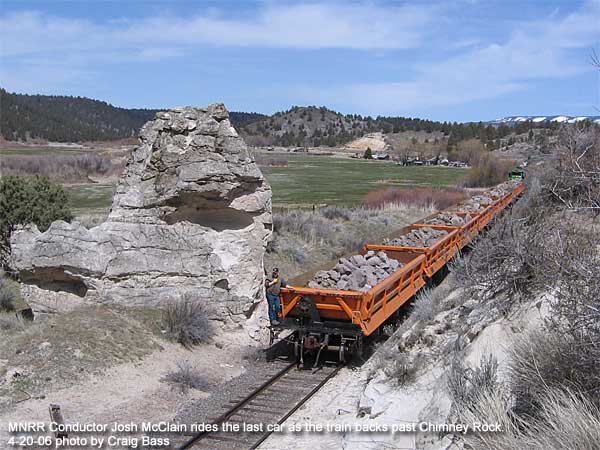 Just then, the rock train arrives, having backed down the line from Lakeview. 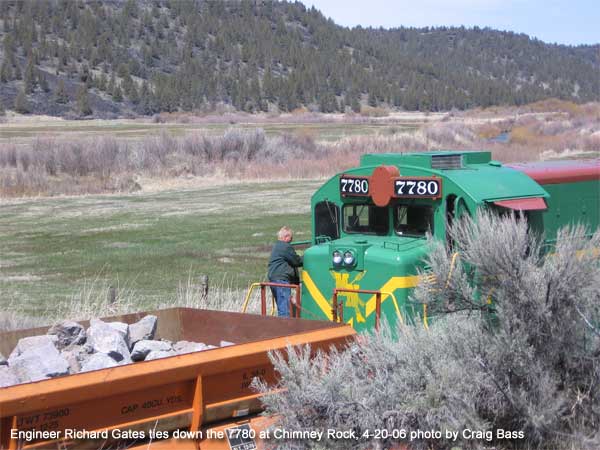 The word to wait is given, and engineer Gates sets the hand brake on the locomotive for the day.  They will leave the train on site until the work is performed.

After leaving the bank erosion site at MP 466 on the Lakeview line, I decided to drive back to Alturas and try to follow the tracks as much as possible back towards home and see what interesting things begged to be photographed.  I found a couple of those things. 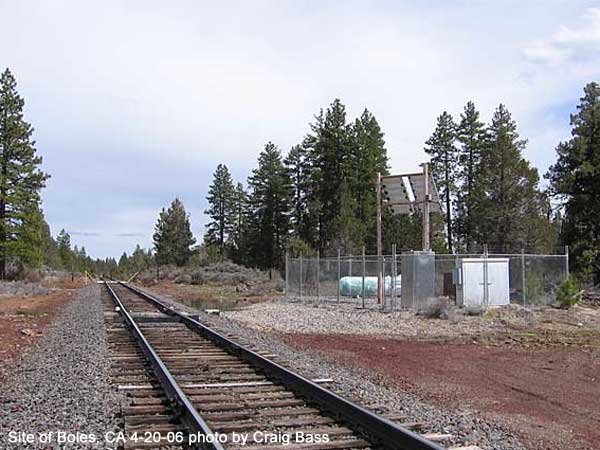 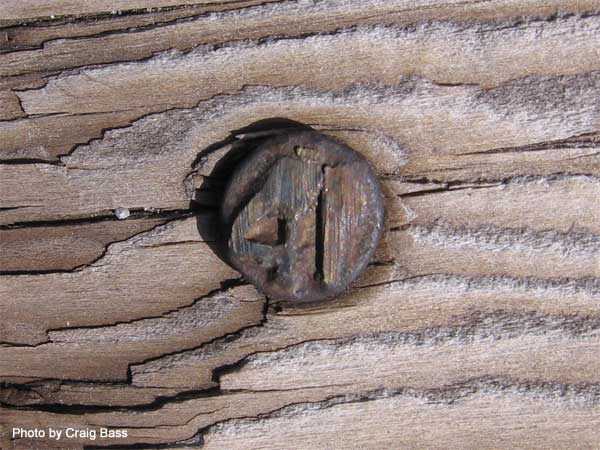 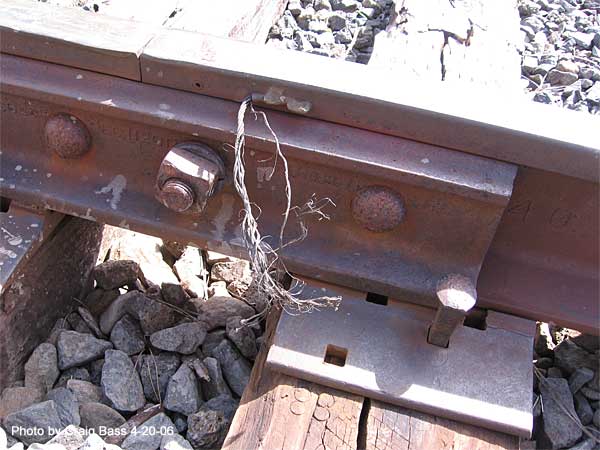 Don't know why there would have been a bond wire on a single rail out in the middle of nowhere - this being dark territory and no crossing signals.  There was no bond point on the adjacent rail; so was this a relay rail from somewhere else, I wonder? 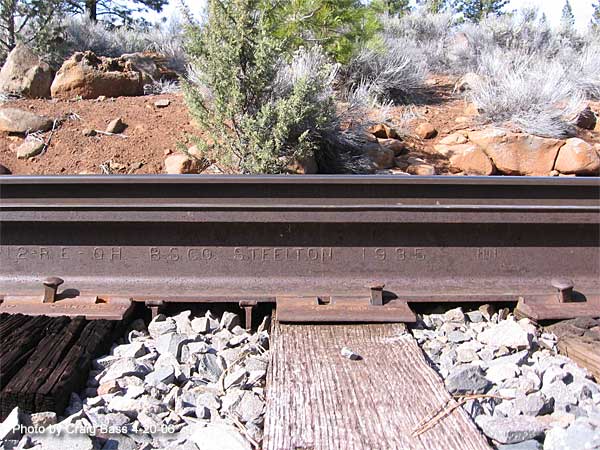 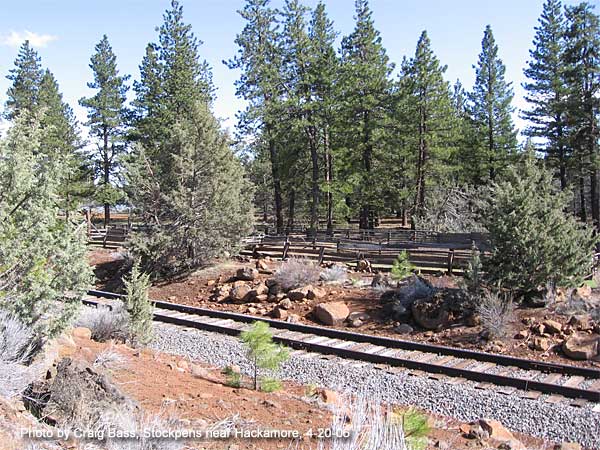 I captioned this photo as stock pens near Hackamore, but in retrospect I believe it's probably the location of a horse camp and had nothing to do with livestock or the railroad.
Map location 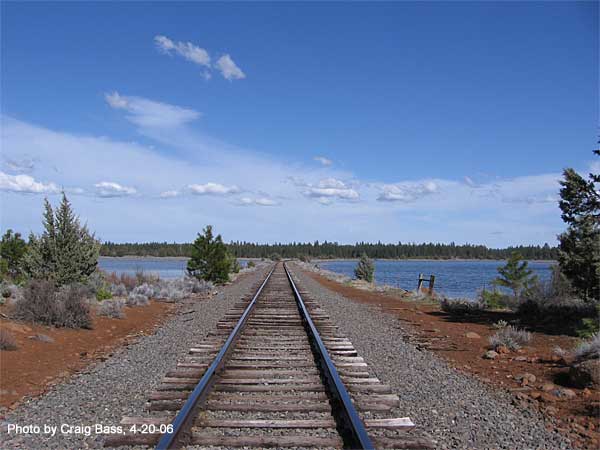 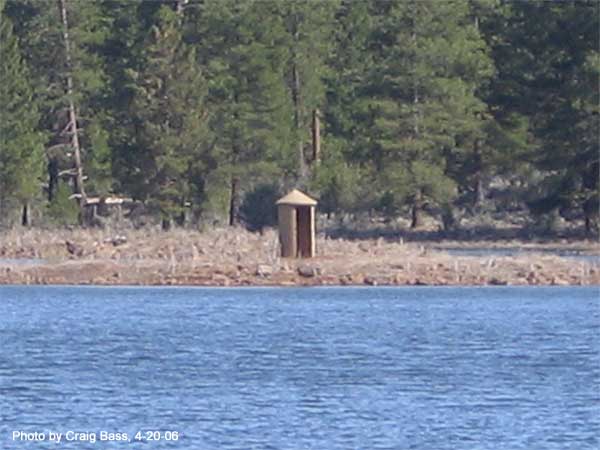 For reasons unknown to me, this old concrete SP phone shelter has been moved to an island in the reservoir. 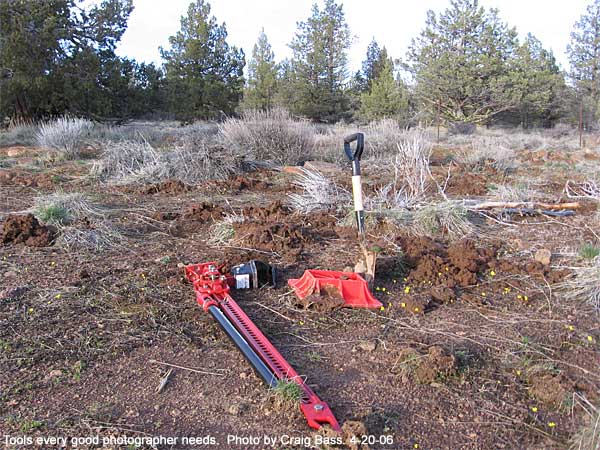 Next: Returning to the scene of the delayed "bank job."