On Veterans Day, November 11, 2005, the Klamath County Chamber of Commerce held a ribbon cutting ceremony for the Modoc Northern Railroad at the wye at Texum, a mile south of Union Pacific's Klamath Falls yard (map location). The ceremony was attended by several dignitaries, including members of the Board of Directors of the Chamber of Commerce, principals of the railroad, representatives of local government, customers and potential customers of the railroad as well as local news media. While we awaited the arrival of the inaugural train, MNRR General Manager, Don Blansett, greeted early arrivals with coffee. 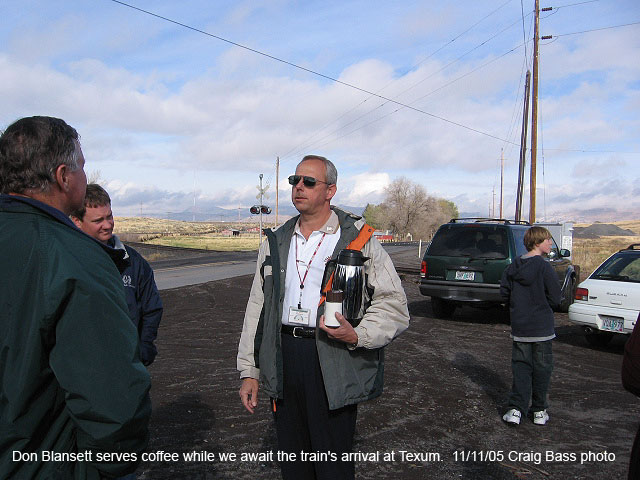 The inaugural train consisted of Modoc Northern Railroad's General Electric B30-7 #7780 and B23-7 #1011, caboose #01480, two passenger coaches borrowed from the McCloud Railway, and Union Pacific's C40-8 #9212. It arrived on the north leg of the wye after coming from UP's Klamath Falls yard and paused short of the Tingley Lane grade crossing to pose for pictures and stand by for the ribbon cutting. 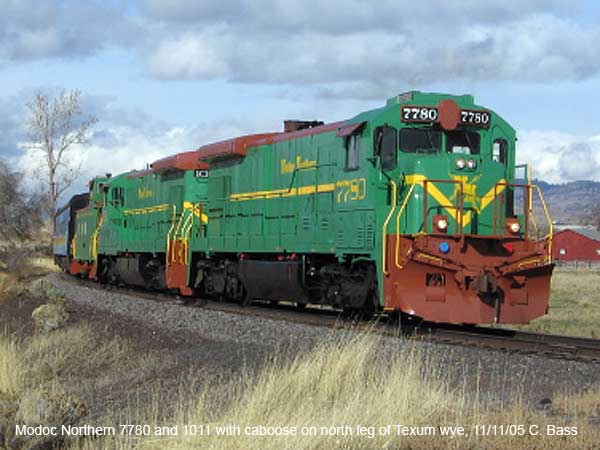 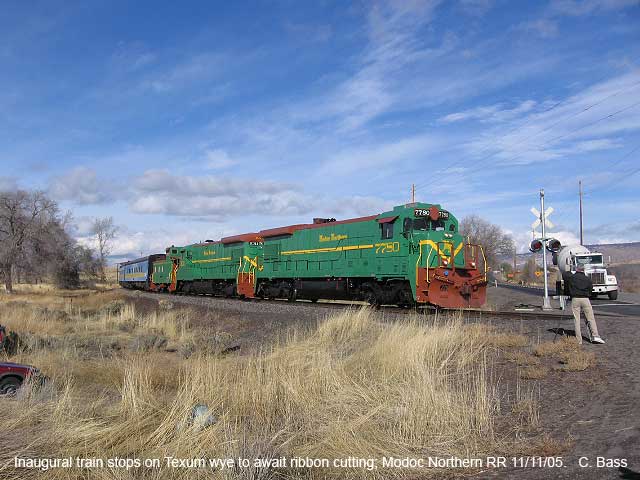 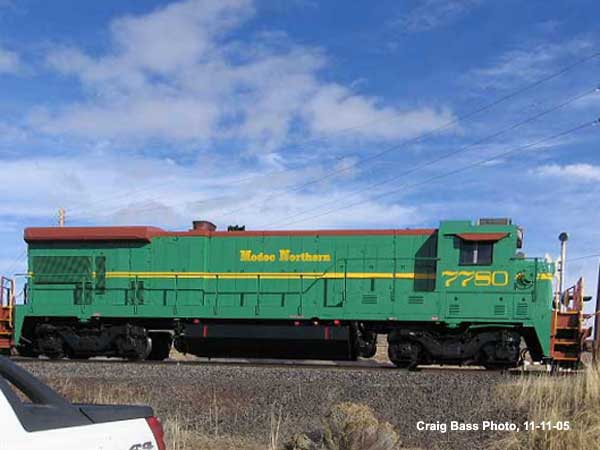 After a few minutes of speeches and handshaking, the ribbon was strung across in front of the 7780 and the dignitaries lined up for a photo op. 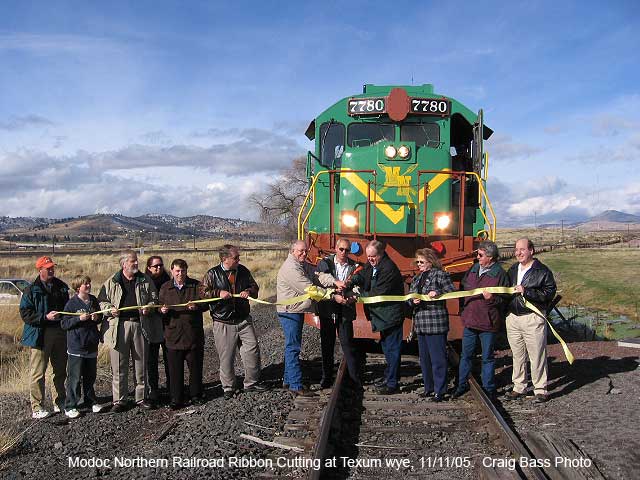 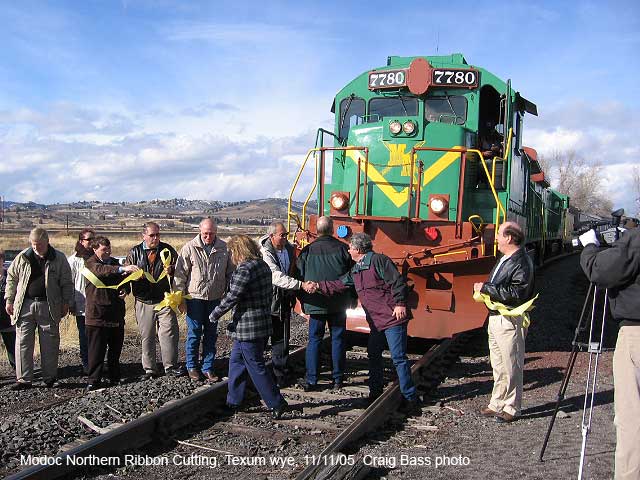 Then the engineer eased the train across the Tingley Road crossing and stopped to pick up the passengers for the trip. 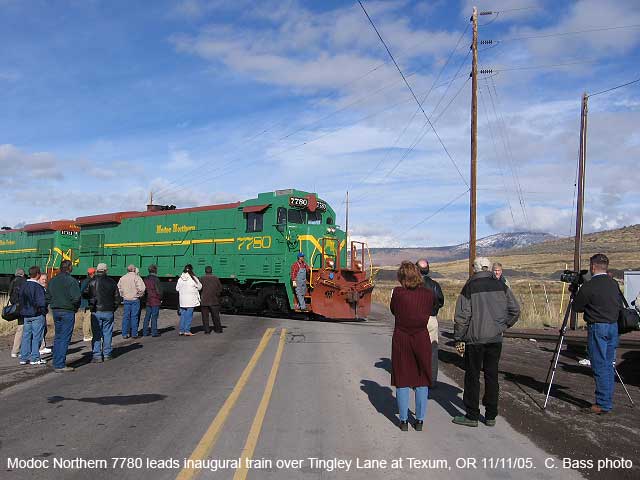 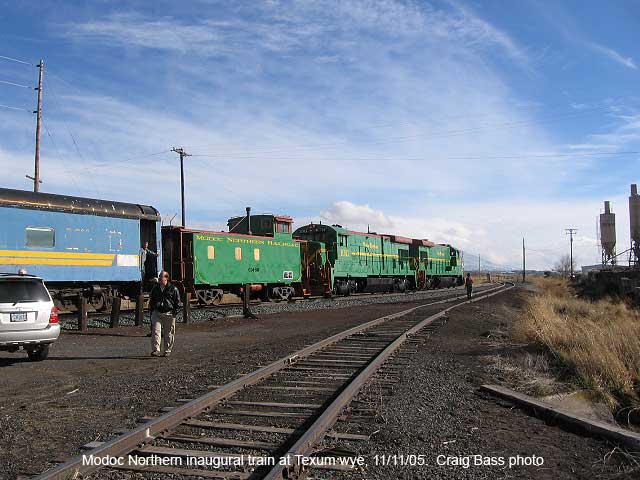 Before passengers were boarded, the crew uncoupled the passenger cars and set the caboose out on the south leg of the wye to give passengers a smoother ride without the slack-action introduced by the caboose's freight draft gear. 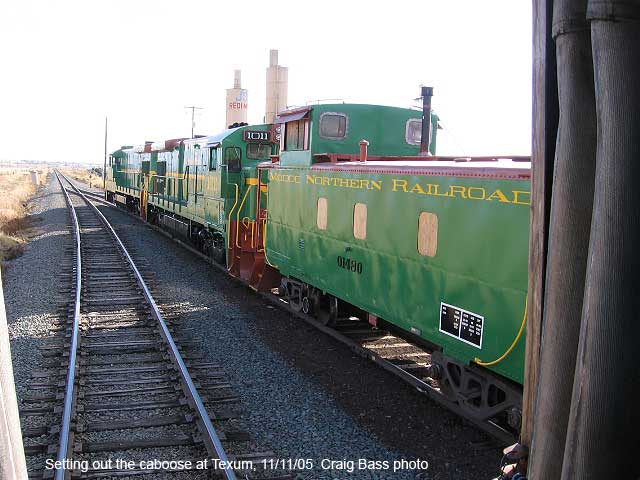 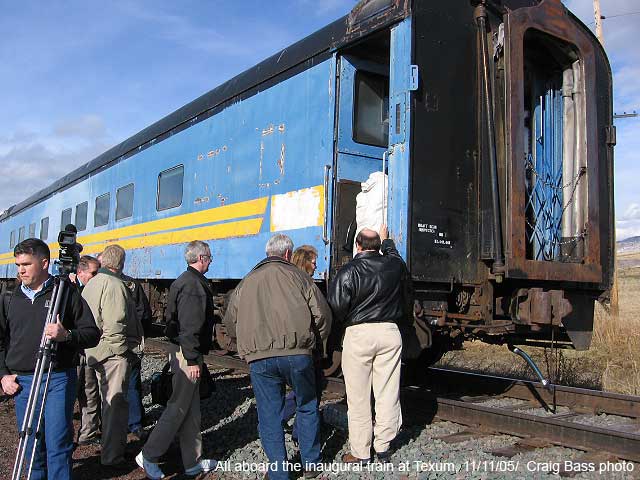 Then the power was backed up and coupled up to the passenger cars. 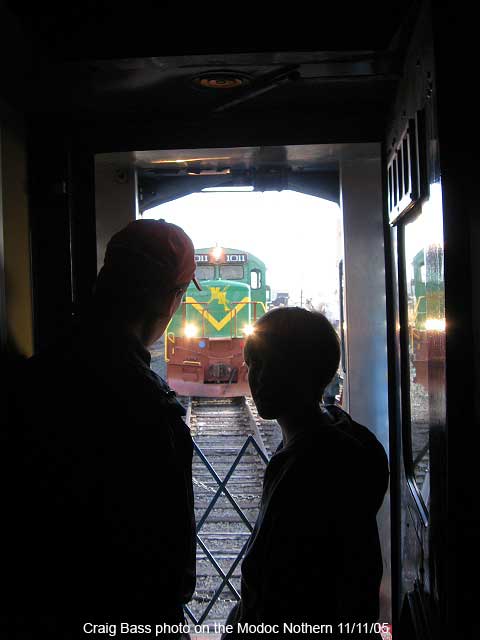 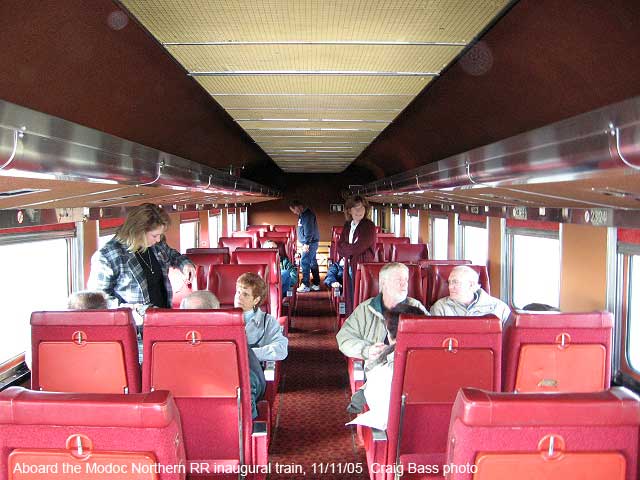 Once everyone was safely aboard, the train headed south to Tulelake, California (map location).  Although the railroad had been in operation for several days with borrowed UP power, this marked the first trip that the Modoc Northern's locomotives were to make on the their new home rails. 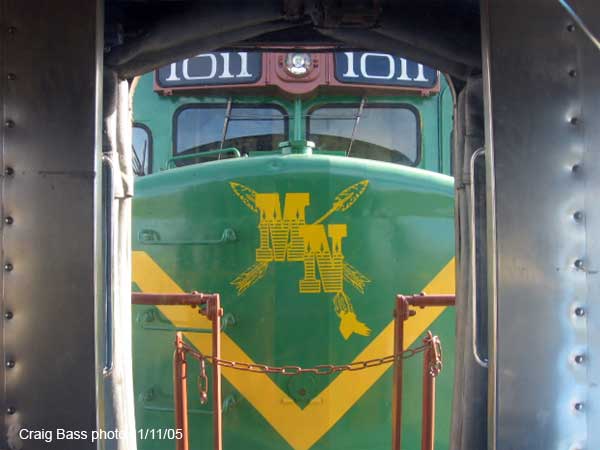 A few minutes after departing Texum, Reba Van Acker, President of the Klamath County Chamber of Commerce, introduced Don to the guests and he in turn introduced the train crew and other Modoc Northern representatives present, and then spoke briefly about the vision of the railroad. He covered the history of the Modoc Northern from when it was a "paper railroad" of the Southern Pacific to present (including the conversations he had had with the Union Pacific beginning four years ago).

He reiterated the statement that the success of the Modoc Northern Railroad is tied to the viability of the communities it serves. He also explained that although a new office trailer has been set up at Tule Lake, they plan to construct a new depot there beginning next summer. He also mentioned that the Modoc Northern will be a "daily except Sunday" operation, running, as has already been reported, between Klamath Falls and Tule Lake on Mondays, Wednesdays and Fridays, and between Tule Lake and Alturas on Tuesdays and Thursdays. They will run Saturdays on an "as needed" basis.

In speaking with Matt McGrath, Station Agent for the Modoc Northern, I found that they plan to run during daylight hours when at all possible.

Although track east of Canby is a little soft in spots, an engineering crew will be out on the line very soon tamping ballast and making repairs on the line to Alturas.

Currently there are 17 customers on the railroad, some of whom were present on the train. One customer was impressed when a string of loaded cars was spotted on his siding one afternoon and picked up empty the next morning. (Prior to MNRR's service, he had to wait a week between trains under UP's schedule.)

At Merrill, we passed a collection of old steam locomotives and equipment in various stages of repair (map location). Jeff Forbes, McCloud Railroad's owner, pointed out that these belong to Fred Kepner. Mr. Kepner had plans to construct a logging and railroad museum and had moved this equipment to Merrill several years ago. 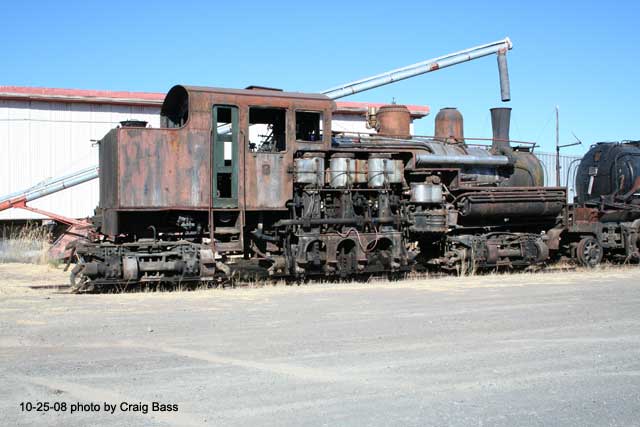 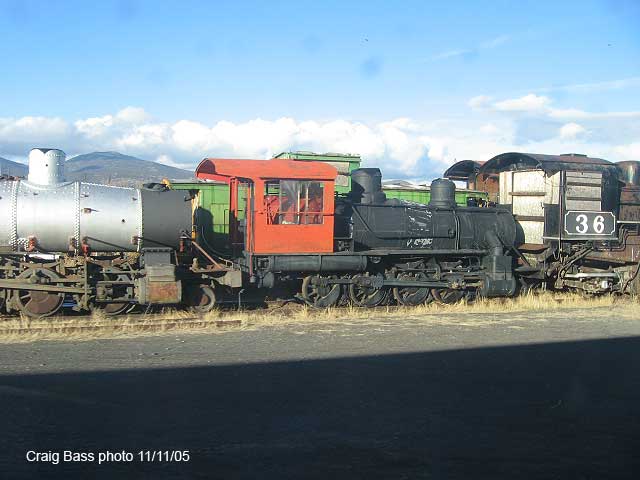 On arrival at Tulelake, a box lunch was served and the public was allowed to tour the 7780's cab.  A little boy of four or five got to blow the horn, much to his excitement and everyone else's amusement. 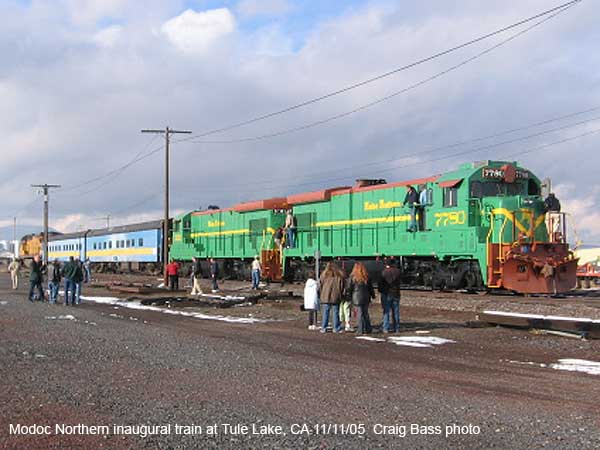 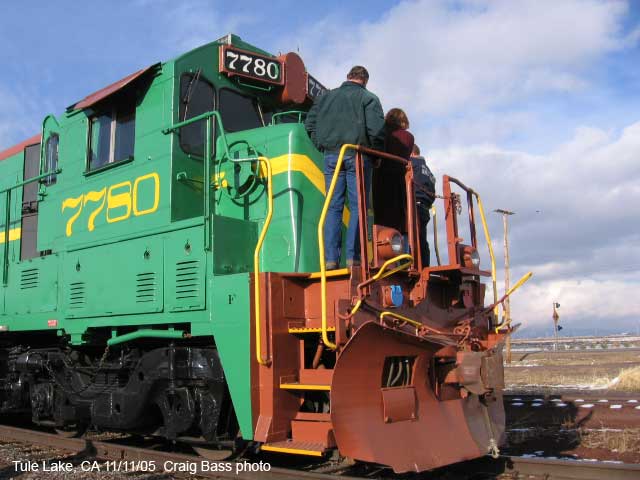 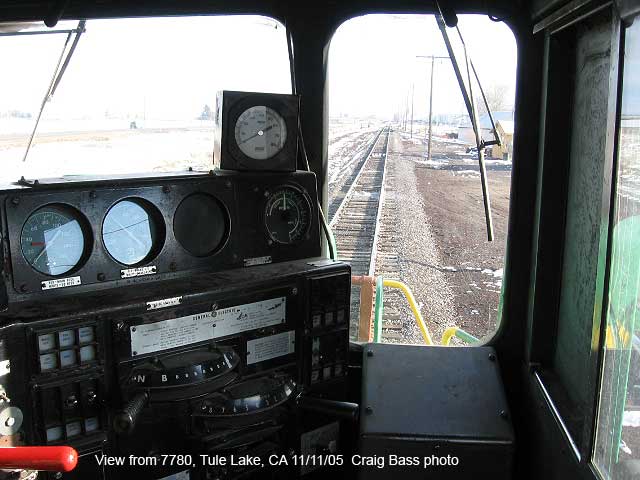 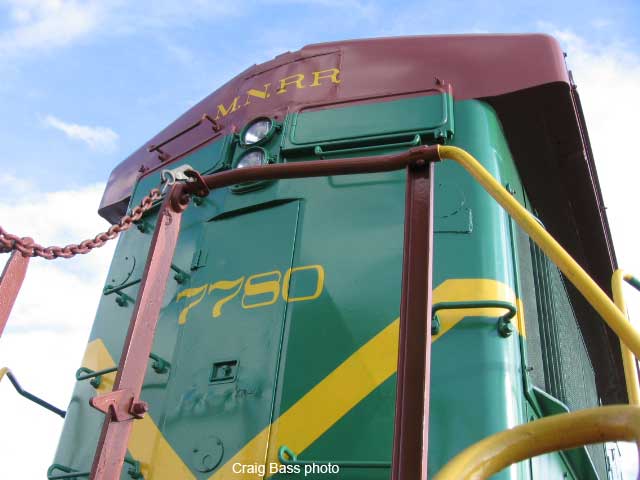 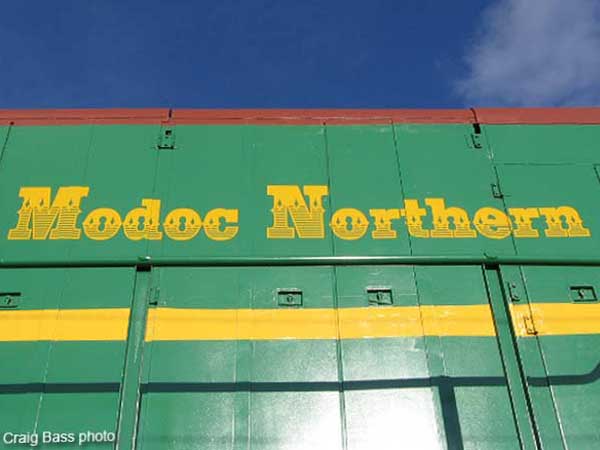 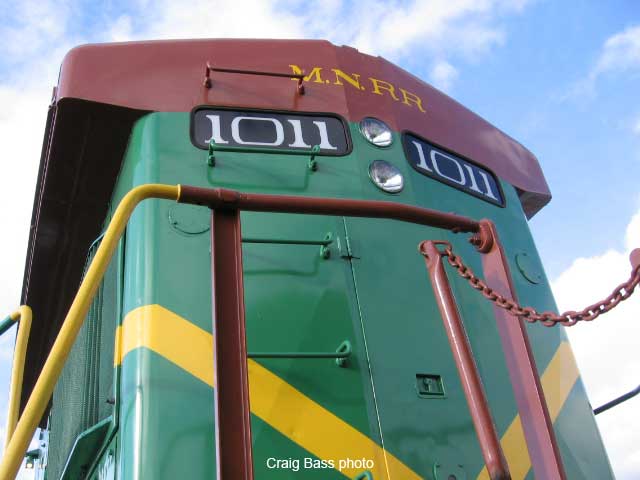 After awhile, everyone reboarded and the train returned to Texum, pulled by Union Pacific 9212.  Along the way, the line-side defect detector just south of Matney Road alerted the crew of a hot axle bearing and the train was stopped at  Stuckel and inspected (map location).

No defects were found, and the train returned to Texum at 3:55 without incident.  I had a previous engagement at 4:00 pm so I had to take off right away, but I would have much preferred to hang around a little more. 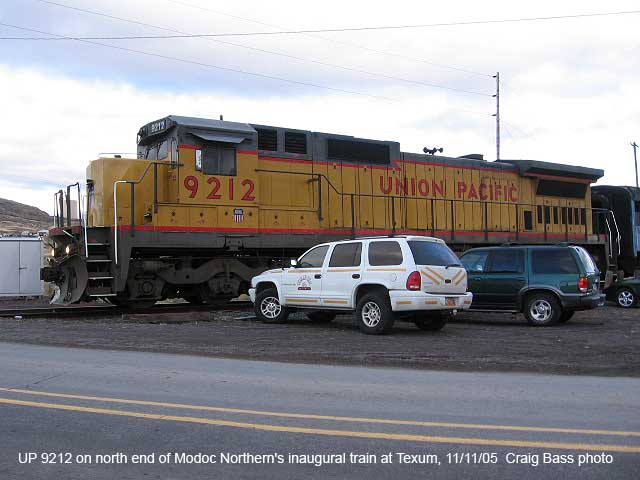 Today's train itself is now part of the Modoc line's history. It will also probably be the last passenger train on the Modoc subdivision for a very, very long time.

Next: Photos taken at Tulelake and Hatfield, CA in December, 2005