My Memories of the Santa Fe Railway in Fallbrook, California

I spent many of my childhood years living alongside the Santa Fe's branch line in southern California's "Friendly Village" of Fallbrook, also known back in the day as "The Avocado Capital of the World."

There has been a lot written about the early history of the railroad in Fallbrook, but documentation of the Fallbrook branch seems to end in 1917 with equipment being hauled up into town after the final washout of the old California Southern mainline in Temecula Canyon, where Fallbrook's original station was located at the base of De Luz Road.

Because the original line's history is readily available at many places both on the Internet and in print libraries, I won't delve into it here. Instead, I would like to share my personal memories of the Santa Fe Railway's presence in Fallbrook during the more modern 1960's - 80's era. 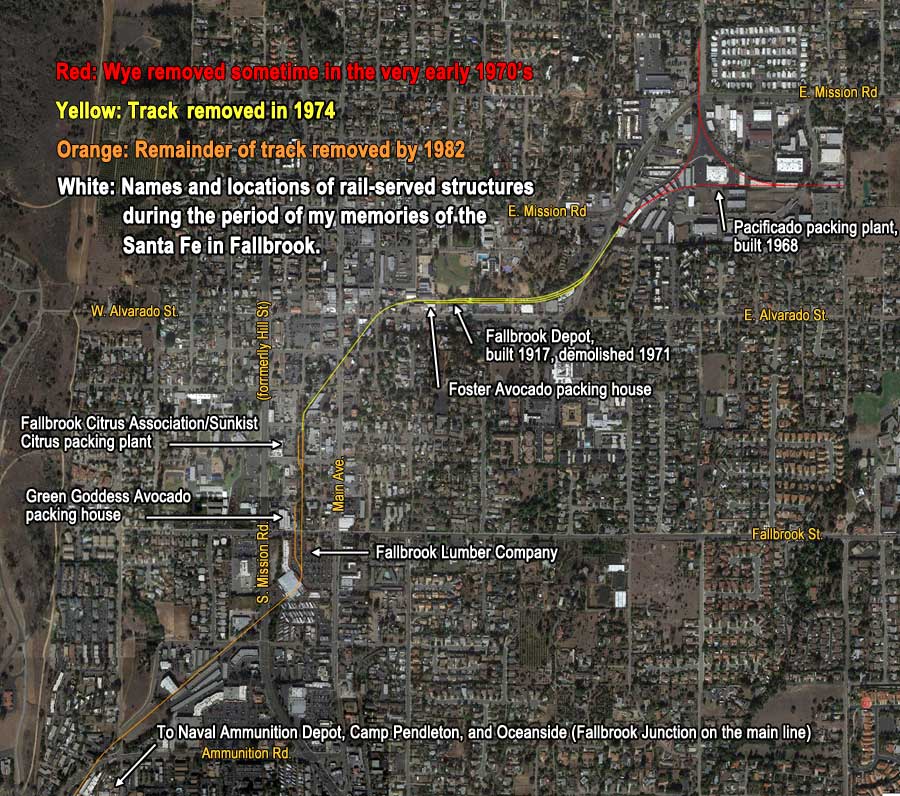 In the early 1960's, my family lived in a mobile home (they called them "trailers" back then) in the Pleasant Homes Trailer Court on Aviation Road. The entrance to the trailer court was right next to where the Santa Fe's Fallbrook branch crossed Aviation, and the court's playground was right next to the tracks (without so much as a fence between them - my how times have changed!). I loved to watch the train when it passed, and to this day the smell of creosote, diesel smoke and lube oil on a warm summer day takes me back to my childhood.

Back in those days, Fallbrook was generally served by a freight train three days a week. Usually, the train would consist of two blue-and-yellow Geeps, one to six cars and the compulsory red caboose -- or, in Santa Fe parlance, waycar. After the lumber yard closed down, service dropped to once a week except during harvesting seasons when it was back to three days a week or, on rare occasions, every weekday if traffic required.

Toward the end of the Santa Fe's lifespan in Fallbrook, trains were powered by the then-modern CF7 locomotives, which the railroad had built in-house from some of their old F7 streamlined cab locomotives. 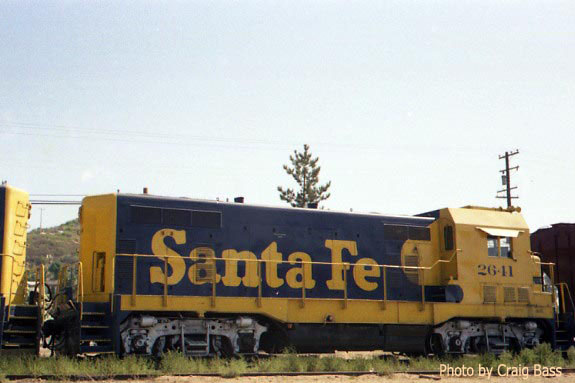 Occasionally a boxcar or flatcar would be spotted on the team track at the station (a small, three track yard was adjacent to the depot); there were other lumber yards in town that were not rail-served, as well as agricultural equipment dealers that would occasionally get a load of something by rail.  One week a covered hopper was parked on the team track and a portable conveyor was positioned to allow the hopper doors to be opened to discharge whatever bulk commodity it was loaded with onto the belt where it was carried up to the top of the belt into a chute to be loaded into dump trucks.

During the summer, Santa Fe would send a weed spraying train through town. I only recall seeing it a couple of times, but it consisted of a motorcar (aka "speeder," or, as my brothers and I called them, "putt putt cars") pulling a spray rig with tanks on flat work cars.  I have a memory of waiting for a weed train to cross Main Street.

Because it still had very some of the original lightweight rail dating from 1880, and diesels didn't need to be turned around like the old steam engines were, the railroad pulled up the wye sometime in the 1970's, and from then on the engines would run around the train at the station siding. I got to observe this several times; the train would enter the yard on the middle track and stop with the caboose west of the first switch. They would uncouple the caboose there, pull the train clear of the switch, then drop the cars and run the engines up to the east switch. They would back the engines down the "north" track (the longer siding of the yard) and couple up the caboose, pull it through the north track and then back it down the middle track to the train. They'd couple the caboose to the standing cars, then run the locomotives back to the east switch, back down the north track past the train to the west switch, then back up the middle track to pick up their train, ready to head back out of town with the engines and caboose on the correct ends of the train.

The depot was torn down in February 1971. I went to school on the bus and one morning there was a bulldozer being unloaded from a low boy next to the depot and when I came home from school on the bus that afternoon the bulldozer was resting triumphantly on top of a pile of sticks that used to be the depot. They had put a new coat of paint on the building only three months earlier, so it was quite a surprise. 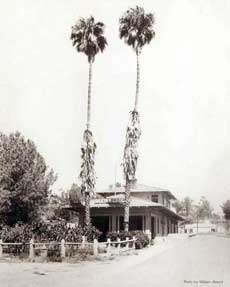 Along about 1974, the Santa Fe removed the tracks northeast of College Street. At that point, the Sunkist plant (actually, it was the Fallbrook Citrus Growers Association's plant; they packed for Sunkist) was the town's only rail shipper and the train crew would leave their caboose in the yard on the Naval Ammunition Depot and back into town to pick up or set out at Sunkist. If there were more cars than would fit the plant siding (I think there were four rail doors on the building), they would leave the extra cars on the stub of the mainline next to the siding.

Each time the trackage was shortened, end-of track was protected by two ties, one end of each rested on a railhead and the other end was nestled between two running ties under the opposing rail.

1974-75 found me working after school and through the summer as a "Stock Boy" at the Sprouse-Rietz store in Fallbrook. Each evening, one of my duties was to tear up and flatten cardboard boxes and toss them in the dumpster. I did this on the rear loading dock of the store, which, due to the store being located on a hill above most of the rest of town in a shopping center, had an excellent view straight down the tracks between Fallbrook and College streets. Often, I was fortunate to be able to watch the train switch the Sunkist packing plant while I worked.

One distinct memory I have of those days was watching a train leaving town.  The last car was an empty flatcar they had picked up from the Fallbrook Lumber Company siding, and one of the crew members was standing in the middle of the car.  Why?  I have no idea.

The Fallbrook Citrus Association's packing plant closed and then there were no more customers on the line. By 1984 the tracks in Fallbrook were removed after much of the line on Camp Pendleton had washed out during high rains. Some of the track on Camp Pendleton was rebuilt so that the Naval Ammunition Depot would still be accessible by rail but since then the tracks have been removed through Camp Pendleton. 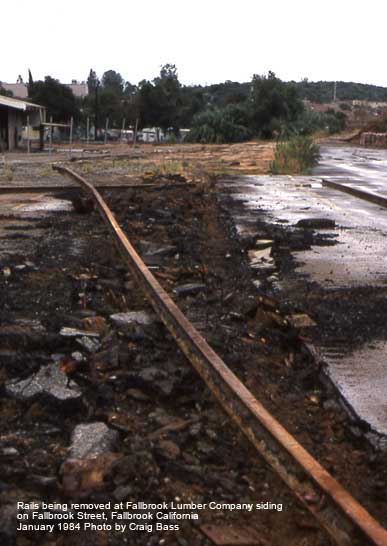 Rails removed at Fallbrook Street; this is where the Fallbrook Lumber Company siding used to be. 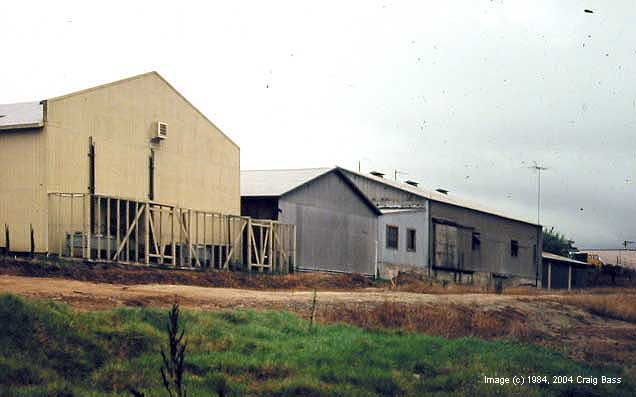 These structures off of Aviation Rd., shown here after the track had been removed, were never served by rail during the time I lived in Fallbrook, and may never have been. 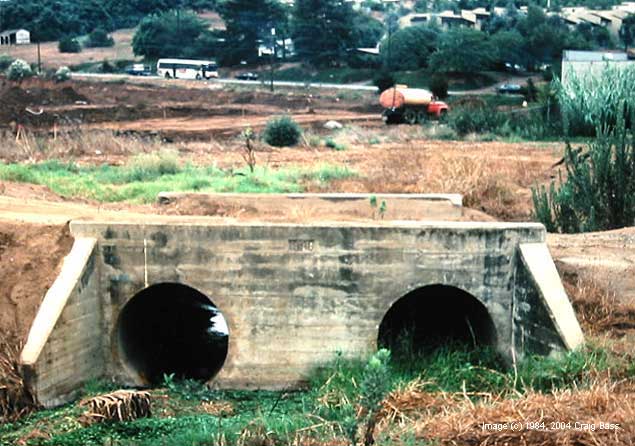 Culvert dated 1940 was left in place for some time after the tracks were removed, just north of Ammunition Rd.  In the background, site preparation work was being done for the a new shopping center after a mobile home park had been removed. 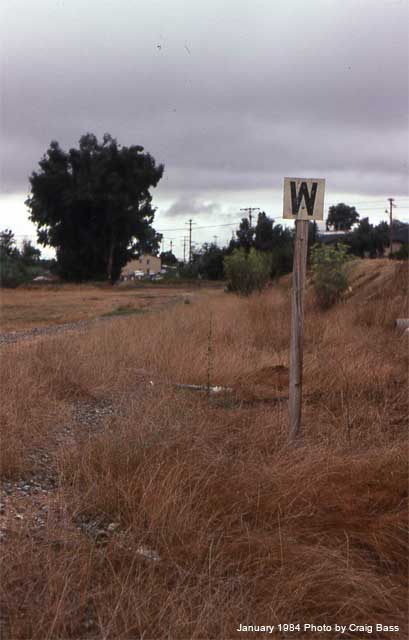 "Whistle post" left standing along the bare roadbed told engineers (back when there were tracks and trains) when to start blowing the horn for the Alturas St./Ammunition Rd. grade crossing.

According to the Caltrans 1982 California State Rail Plan report, the branch was officially abandoned in June of 1981. Today, "Fallbrook Junction" still remains on the Santa Fe's coastal main line just north of Oceanside (I think it belongs to North County Transit District now); there is a wye and a small yard there.

Next: The Santa Fe Depot in Fallbrook