My Memories of the Santa Fe Depot in Fallbrook, California

Built in 1917 an located on East Alvarado Street and protected by two landmark palm trees, the Santa Fe's Fallbrook depot was a "combination" station in that there was a passenger waiting room at one end (closest to the camera in the picture below) and a freight room at the other. The passenger end had a bay window on the track side, while the freight end had an elevated floor with a loading dock that wrapped around the end of the building.

At the passenger waiting room end, the depot had a covered breezeway in which the resident station agent used to park his car. Note the reefer - refrigerated boxcar - spotted on the siding to the left of the station in Bill Ahrend's photo below, just visible through the bushes.  When I was young I would often see several of Santa Fe's "Slogan" reefers lined up on the station tracks during harvest seasons waiting to be loaded at the Sunkist plant, bearing such slogans as "Ship and Travel Santa Fe All The Way" and "Route of the Grand Canyon," among others. 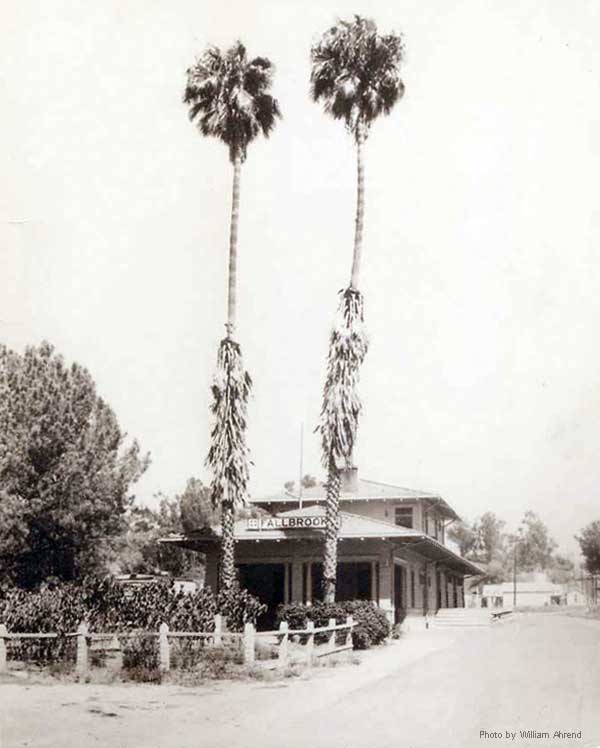 The second story was a living quarters for the station agent and his family, if he had one. Although I spent two weeks during my first grade year (sorry, Mrs. Novak) skipping school every day (another story for another time) and rode my bike past the station many times, I was never brave enough to try to make the station agent's acquaintance.

In the distance beyond the depot, a bulk fuel distribution facility is visible in this picture. It consisted of a small shed and several tanks. By the time I was cutting class, all that was left of this facility were the tank footings and the shed as well as a portion of a steel spiral ladderway that was laying on the ground. Just to the east of that used to be a stock pen which had a loading ramp that faced the track.

Back in my boyhood days a special passenger train would come to town for the Fallbrook Avocado Festival. It was a streamlined Santa Fe train pulled by red and silver "warbonnet" F-unit or PA locomotives (similar to the ones pictured below, seen at the California State Railroad Museum in Sacramento) and brought dignitaries to help celebrate the festival. It would arrive at the station accompanied by a lot of horn honking and cheering from the waiting crowd. There were always lots of pennies laid out on the rails for it to press. I probably still have one somewhere.

According to the Fallbrook Avocado Festival history page at www.fallbrook.org, "By the time the 1962 Avocado Festival took place, Fallbrook was jumping. . . . On Saturday, October 5, . . . local dignitaries gathered at the train station on Alvarado to welcome a Santa Fe train full of special visitors from Los Angeles invited by the Fallbrook Board of Realtors. During the day these travelers also toured Fallbrook and were treated to a barbeque . . . By 1967, festival attendance grew to 10,000 and the now popular train from Los Angeles earned a nickname: the Avocado Flyer."

Also, I recently discovered an April 15, 1966 newsletter from the Pacific Southwest Railway Museum that indicated a special passenger trip was scheduled on May 14, 1966, to run from National City to Fallbrook for the Avocado Festival. The schedule and on-train flyer for that special train is also reprinted on the San Diego Railway Museum's website showing that the train, called the "Fallbrook Chief" was to meet the "National Avocado Festival train" from Los Angeles at Fallbrook Junction (conditions permitting) and then to follow it to Fallbrook, a distance of 16.9 miles, taking one hour and fifteen minutes to make the trip. Fallbrook Junction is located just north of the city of Oceanside on the (former) Santa Fe mainline. The flyer states that, while the passengers are touring Fallbrook, "Avocados may be left on the baggage car providing there is identification."

If anyone has any pictures of any of those special trains to Fallbrook, I would love to see them.  The following two photographs, depicting a special train in Fallbrook for the Avocado Festival in 1964, were sent to me by a site visitor named Greg. They had been listed on e-Bay and although the photographer is unknown, the listing stipulated that no copyright exists on the images. 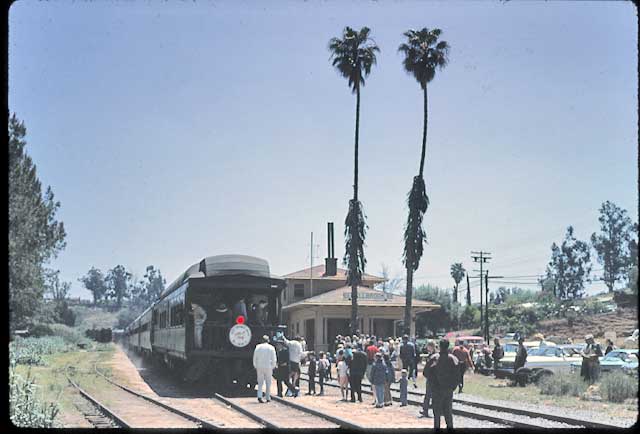 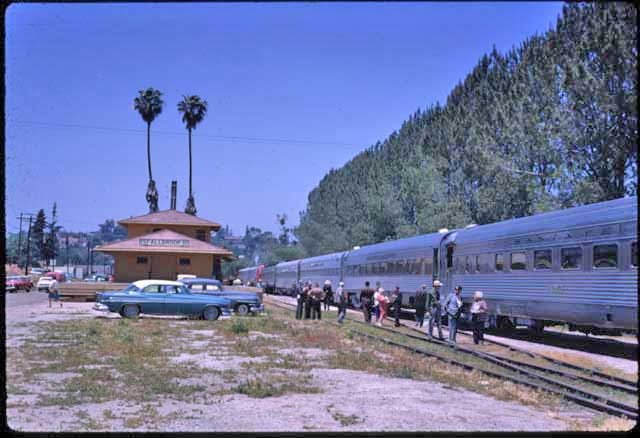 Could that red and white automobile at the far left of the image be my family's 1957 Chevy Nomad wagon? One can only speculate

When I was young I used to think that the depot would make a great house, and was very sad when it was torn down. I would love to know more about the history of the depot and the people who worked there, as well as when the last scheduled passenger train visited. If anyone has any information, other pictures, floor plans or other drawings of the Fallbrook depot, please email me, because I am very interested in such information.